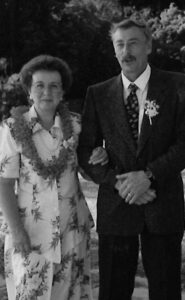 It is with great sorrow that we announce the passing of our dad, GARRY NORTON ROBINSON. He will be reunited with his love of 60 years, our mom, Betty Anne Robinson.

Dad was born March 4, 1941, the fourth of five children to Fletcher and Ruby Robinson, and passed away on Sunday, April 24, 2022 at Chinook Regional Hospital at the age of 81 years with his daughters by his side. Left to cherish Dad’s memory are his two daughters Carey (Dwight) Yanke and Rochelle (Kevin) Kasperski and his two grandchildren Jon and Sarah Kasperski. Dad is survived by his brother Darrel (Mary Ann); his sisters-in-law Gladys Orich, Judy (Ray) Bouchard, Donna Robinson; as well as many loving nieces and nephews.

Dad was born in Lethbridge but spent the beginning of his life living in the Waterton RCMP detachment as his late father Fletcher Norton Robinson was an RCMP officer. There were many other southern Alberta towns that dad lived as his father was transferred with the Mounties, including Magrath where his grandkids were raised.

Dad married the love of his life, Betty Anne Chomicki, September 15, 1962 and they spent their whole lives living and working in Lethbridge. After graduating from SAIT, dad co-owned and operated several automotive businesses including British Leyland and Saab dealerships. He was a talented mechanic and he passed much of his knowledge to his daughters. Dad was a problem solver and it seemed he could fix or build anything!

There was never a dull moment with Dad; he was always a busy guy! At home he loved carpentry and renovations, as well as gardening. He always made our home a beautiful place to live. He loved teaching his daughters, and later his grandkids, how to build and fix things. Besides his kindness, Dad taught us how to work hard and be generous.

Hockey was an important part of dad’s life. In his younger years he did some coaching and later became one of the first members of the Lethbridge Hockey Hounds. Dad spent countless hours volunteering to support many hockey programs in Lethbridge. So many cherished friendships blossomed through his work with the Hockey Hounds and these members were important people in his life.

Golfing was another of dad’s favourite activities. After he retired you could find him with his buddies on the golf course. He was a longtime member of Henderson Lake Golf Club and spent many hours there with cherished friends. Dad was also a life-time member of the Lethbridge branch of the Independent Order of Odd Fellows.

In lieu of flowers, donations can be made to Lethbridge Hurricanes Education Fund, 2-2510 Scenic Drive S, Lethbridge, AB, T1K 7V7 or etransfer to finance@lethbridgehurricanes.com

A private family service will be held at a later date.