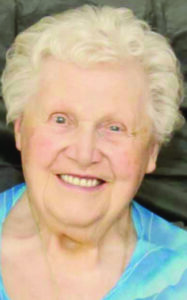 Kathleen Frances Ferguson, beloved wife of the late Scotty Ferguson, passed away in Taber on Friday, May 6, 2022 at the age of 93 years.

A private funeral service will be held at Southland Funeral Chapel, 5006 – 48 Avenue, Taber on Tuesday, May 10, 2022. Burial to follow at the Taber Memorial Garden. Condolences may be forwarded by visiting our website at www.southlandfuneral.com.

Due to the fact that in person attendance at the service is limited and by invitation only, those who wish to view the service may do so by visiting Kaye’s obituary page on our website and clicking on the livestream link that will be available at 1:45 P.M. on Tuesday, May 10, 2022. The livestream will begin at 2:00 P.M.

She was predeceased by her husband Scotty Ferguson, her parents Lynn and Jean (nee Sinclair) Wenbourne, brother Lynn Wenbourne and son-in-law Bill Schmidt.

Kaye was a loving hardworking wife, mother, grandmother and great grandmother. Nothing made her happier than cooking for a crowd. She enjoyed time spent at Lake Koocanusa where they had a little retreat.

If friends so desire, memorial tributes in Kaye’s name may be made directly to the charity of one’s personal choice.