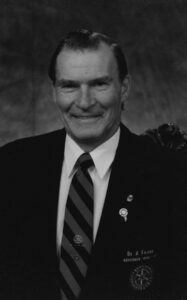 Dale Whiteside Merchant of Lethbridge passed away peacefully after a prolonged illness on May 10, 2022 at the age of 84.

Dale had a personal and professional life centered around service, having served 33 years in Family and Social Services for the Government of Alberta.

He was passionate about the good work delivered by Rotary International and was a lifelong Rotarian. He joined the service organization in 1965 and remained active to the end. He embraced the mission of Service Above Self and cherished the many friendships he cultivated through his travels, including in his service as Rotary District Governor in 1994/1995.

Dale was appointed to the University of Lethbridge Senate in 2007.

Dale was predeceased by his wife Patricia Joan Merchant in 1993 and is survived by his four loving children – Scott, Brad (Maha), Jill (Wade) and Chris (Laura). He also leaves behind his cherished friend, Beth Campbell.

A Memorial Service will be held at 2:00 PM on Wednesday, May 18, 2022 at MARTIN BROTHERS RIVERVIEW CHAPEL, 610 4 Street South, Lethbridge, Alberta.

Flowers are gratefully declined. Those who wish, memorial donations may be made to The Salvation Army at salvationarmy.ca.