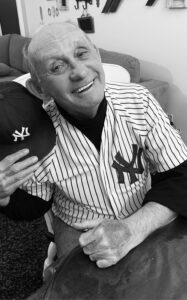 After a lengthy illness, Greg Park peacefully passed away in the Chinook Regional Hospital with family by his side on Thursday April 14, 2022. He is survived by his children Shelly (Micheal), James (Lydia), Jennifer (Wade),Suzanne (Nathan), and Laura (Najib). He is also survived by 13 grandchildren and 12 great grandchildren. He is predeceased by his parents Robert and Thera Park, his sister Wilma Fedorak and his brother Bob Park.

Greg was born on July 30, 1947 in Lethbridge. Greg ran the Lethbridge Farmers Market until his retirement. Greg was an avid sports fan, and in his youth he volunteered on many community sport teams. One of Greg’s greatest joys was music, which brought him solace and wisdom. He had a music collection like none other. Greg touched many lives through his service and was a great example in the AA recovery program.

A family service was held at Salmon and Sons Funeral Home on April 19, 2022, followed by internment at the Archmount cemetery.

The family expresses their thanks to all the doctors, nurses and staff who cared for him during the months of his illness at the Chinook Regional Hospital.

One Condolence for “PARK, Gregory Kent”