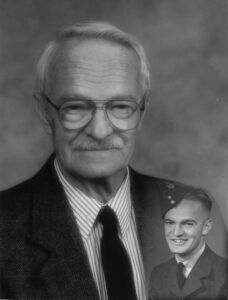 DANIEL DAVID ROHOVIE, of Lethbridge, beloved husband of the late Rose Rohovie, passed away peacefully at Fairmont Extendicare on Saturday, May 14, 2022 at the grand age of 100 years.

Dan was predeceased by his sister Mary Leister and brother John Rohovie.

Dan was born in Coalhurst, Alta. on September 11, 1921 to Lillian and Nicholas Rohovie. It was in Coalhurst where he was raised and educated.

Dan started with CP Rail in 1942 and shortly after joined the Royal Canadian Air Force where he trained as a pilot. It was while serving with the RCAF in Regina, Sask. that Dan met his beloved Rose. The two were married in 1943 and moved to Lethbridge to start their new home and life together. Upon returning to civilian life in 1945, he went back to work as an engineer for the railway where he stayed until his retirement in 1982.

Many of Dan’s memories in life included stories of his days on the railroad and he recalled them with clarity and fondness. Dan was an avid photographer and traveller and, along with Rose, made several trips throughout Canada, Europe, Hawaii and Mexico.

Dan was a devoted husband, father and grandfather. He always had time for everyone with a friendly word. He brought this attitude to Fairmont Extendicare during his final six years and enjoyed his time there with staff and other residents.

Dan and Rose had many friends over the years with whom they enjoyed dining and dancing.

Dan’s last hurrah was reaching his 100th birthday. Along with his family and friends, he was honoured by CP Rail with a custom-made bench embossed with his name on the train wheels. That bench is now situated in the garden at Fairmont Extendicare. He also received a painting of a locomotive with a dedication to his 40 years of service to CP Rail, as well as his time served for his country with the RCAF.

Dan was fondly remembered by the railroad community as “Sanitary Dan” for keeping his locomotive spotless – he was often teased about this!

He will be sadly missed by his family and lovingly remembered by all who knew him.

Dianne and her family would like to thank all the staff at Fairmont Extendicare for their loving care and compassion, as well as Dr. Strank for his care and attention to Dan over the years.

A private family interment will be held at a later date.