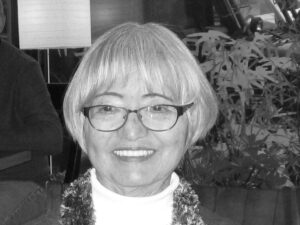 Caroline Hukiko (nee Higa) Sawada passed away on February 22, 2022 at the Chinook Regional Hospital. To commemorate Carol’s 89 years, a Celebration of Life with be held Saturday, May 28th 2022 at the Lethbridge City Hall Foyer. Program begins at 1:30 pm with reception to follow. Parking is available south of the building and on-street in front.

Born on a farm near Hardieville, Alberta to Shinei and Uta (Asato) Higa on November 19, 1932, Carol was the ninth child but first daughter and was followed by three daughters and two sons. Her large family shaped Carol’s life and she always held family close and dear to her heart. The importance of community and a strong work ethic instilled by her parents made Carol a valuable and cherished member of all the communities she lived in. In November 1939, Carol accompanied her father to Okinawa to see his ailing mother. They stayed for six months. Always a proud Canadian, she also held strong to her Okinawan roots through the Lethbridge Okinawa Cultural Society.

In 1955, the new graduate from Galt School of Nursing married the newly- graduated University of Alberta doctor, Kamio Sawada. They began their life together in Calgary, followed by moves to Quesnel, BC and Arborfield, Saskatchewan with both working until the first son, Barry arrived and Carol became a full-time mom. Randy was born 20 months later. The family moved to Taber, Alberta in 1960 where the next two sons, Gordon and Darren were born and where the family spent the next 27 years.

Carol became a valuable member of many community activities especially with the Knox United church and Taber Minor Hockey, and returned to nursing once the boys were older. Although Carol found it extremely difficult to say good-bye to her many Taber friends, in 1987 Kam, Carol and Darren moved to Vernon, BC and they became avid golfers at Spallumcheen Golf Club and skiers on Silver Star. Again, Carol threw herself into nursing, the United Church and the local JCCA and developed a deep friendship with a group of ladies that added so much to her life. She remained an active life-long member of her Galt Nursing alumni.

The next wonderful event in Carol and Kamio’s life started in 1989 when their first grandchild, Kayla was born followed by Jordan, Mackenzie and Justan and baking became a much needed past-time. Carol’s family and friends rallied around her in 1999 when her beloved Kamio passed unexpectedly. As with many events in her life, Carol drew on her inner strength to carry on. She continued golfing, skiing, visiting with family and travelling.

Carol was a great cook and baker, being efficient and having a wide-range of techniques but both were always out of necessity and never a hobby. She used her skills to bake for community events throughout her life as her baked goods were always sought out. Carol was also a super organizer for fund-raising meals and catering to church and community events. One hobby she pursued was quilting – special quilts for her newborn grandchildren, family members and a wonderful community quilt that was done for a fund-raiser. She was known for her joy of walking all her life. Carol travelled with friends / family or with her youngest son Darren, including trips to Okinawa, Japan, across Canada, Australia, Thailand, Israel, Cuba, Caribbean and Alaska cruises and New York.

Over the years, Carol would face the passing of her Higa brothers and dear in- laws; George and Yoshiko (Kohashigawa), Harry and Jessie (Lauder), Jim and Helen (Nishimazuru), Tom, Francis and Sue (Ohno), Sam and Ricki (Jomori), Jack and Victor, brothers-in-law Seiko Miyashiro and Tom Miyanaga. Her Sawada family, parents Kahei and Kane; and Linda and Jim McLaren, Cheiko and Bill Sturley.

Health challenges started to impact Carol and in 2016 she once again returned to southern Alberta, this time to Lethbridge where she could get increasing support and care from family. Always with a deep inner strength, compassion for others and warm smile, Carol would embrace life until her passing.

With Carol’s love of geography and song, our wish for her is that her next journey be full of new sights and beautiful songs to sing.

Carol’s family is very appreciative of the excellent care provided by the Good Samaritan West Highland Centre. If so desired, charitable donations may be made to the Alzheimer’s Society of Alberta and Northwest Territories: alzheimer.ca/ab/en/contact.

One Condolence for “SAWADA, Caroline Hukiko”