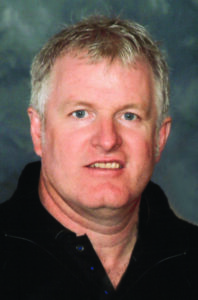 After a courageous battle with cancer, Shannon Lee Ruggles passed into the arms of his Savior Jesus Christ on Sunday, June 12, 2022 at the age of 58 years.

The Funeral Service will be held at the Southern Alberta Bible Camp, 100 – 151002 RR213 Vulcan County, Lomond, Alberta on Thursday, June 16, 2022 at 2:00 P.M. Condolences may be forwarded by visiting our website at www.southlandfuneral.com.

He was predeceased by his father Frank Lynn Ruggles and grandparents Ross and Hazel Ruggles.

Shannon was born in Vulcan on May 9, 1964 to Frank Lynn and Merlene Ruggles. He grew up on the Guess Ranch in the Travers Lomond area. One of Shannon’s greatest loves was the Southern Alberta Bible Camp where he gave his life to Christ at a young age. Throughout his life and through his sickness he remained faithful to that commitment. Especially during the last years of his life, he became an example of godly strength to many doctors, nurses, friends and family. Shannon married Shelley Oevering on June 27, 1987 in Vauxhall, where they live to this day. Shannon and Shelley had two children, Austin and Amber. Throughout his life, Shannon loved helping others in a variety of ways and he was always quick to volunteer his time whenever you needed an extra hand to get the job done.

If friends so desire, memorial tributes in Shannon’s name may be made directly to the Southern Alberta Bible Camp, Box 99, Lomond, Alberta T0L 1G0.

The family is grateful to all the nurses and doctors who cared for Shannon during his illness, especially the palliative care staff at the Taber Hospital.

One Condolence for “RUGGLES, Shannon”