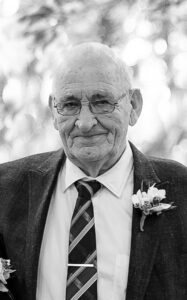 Mr. John Bezooyen of Picture Butte, beloved husband of Mrs. Jenny Bezooyen, passed away surrounded by his loving family on Monday, June 13, 2022 at the age of 82 years.

John was born May 21, 1940 in Culemborg, the Netherlands then immigrated to Canada with his family in 1955. John and Jenny were married in Picture Butte on February 7, 1964.

John was predeceased by his parents; parents in law; 4 sisters; 1 brother; 7 brothers in law; and 2 sisters in law.

The family would like to extend a very special thank you to Home Care, the Palliative team and Bethesda Care Home for the loving care given.

Family and friends are invited to offer their Condolences from 7-8 pm on Wednesday, June 15, 2022 at the NETHERLANDS REFORMED CONGREGATION OF PICTURE BUTTE, 601 3A ST, PICTURE BUTTE, Alberta.

A Funeral Service will be held at 10:30 am on Thursday, June 16, 2022 at the NETHERLANDS REFORMED CONGREGATION OF PICTURE BUTTE, 601 3A ST, PICTURE BUTTE, Alberta with Reverend E.C Adams, officiating.

Flowers are gratefully declined. For those who wish, memorial donations may be made to Bethesda Care Home, Box 1096, Picture Butte, Alberta T0K 1V0.