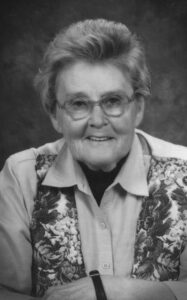 On June 20, 2022, Anne peacefully departed this earthly world to be with her beloved husband.

Anne arrived in this world in Riga Latvia when her parents and siblings were fleeing Ukraine during the Russian invasion of Ukraine on December 04, 1926. After arriving in Canada, they eventually settled in Coaldale along with many other German immigrants.

She quickly became the interpreter in grade one as many of the students could speak only German. She graduated high school at the age of 16 and went on to attend the university of Alberta in the first year of its inception. She met her husband to be, Lyle while teaching in Warner in 1947 and they got married the following year. They had six children, Milton (Heather), Harvey (Hope), Roy (Loretta), Connie (John), Ken (Carole), and Tim (Violetta).

She spent nearly her entire life on the farm near Warner. She taught Sunday school for many years and throughout her years on the farm was unwavering in her dedication and support for her family. Upon one occasion, while questioning her if she ever had any second thoughts about never pursuing a professional career, she replied “I had a far more important job to do, raising and caring for my family”.

She will be sorely missed by all of those who loved her.

Family and friends are invited to pay their respects between 7:00pm and 9:00pm on Thursday, June 23, 2022 at the MARTIN BROTHERS RIVERVIEW CHAPEL, 610 – 4 Street South, Lethbridge, Alberta.