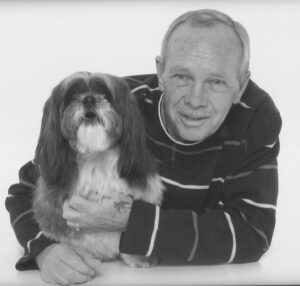 We are heartbroken to announce that our father Allan LeRoy Farberg passed on Sunday June 26, 2022. He will be sadly missed, and will forever hold a place in our hearts. His final day was spent in his favorite place, at home in his backyard enjoying a beautiful sunny day.

Born in Frontier Saskatchewan on July 11, 1942, Allan became interested in cars at an early age. After a stint in the Royal Canadian Navy aboard Canada’s last aircraft carrier, “The Bonaventure” Allan began working as an automotive partsman. He also raced stock cars on dirt tracks and then super stocks on paved oval tracks.

Eventually Allan was hired as the parts dept. manager at Mountview Dodge and settled here in Lethbridge during the 70’s. Allan’s hard work would pay off as he was promoted to Sales manager, and then general manager. Eventually Allan would come to own and operate 3 dealerships in Lethbridge before retiring around 2010.

Pops, finally you can once again enjoy those long walks with your best friend and sidekick, Costas the shih tzu.

There will be a private ceremony with only close family members present. In lieu of flowers, we invite you to consider making a donation to your local SPCA in his honor.

One Condolence for “FARBERG, Allan LeRoy”