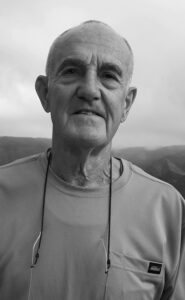 JOHN RAYMOND BURKE, of Lethbridge, beloved husband of Daphne Burke, passed away peacefully at home, on Thursday, July 7, 2022 at the age of 75 years.

Besides his loving wife Daphne, John is survived by his daughter Valerie (Chad) Hande and grandson Chyrus Horbachewsky. Also left to cherish John’s memory are his sister Maureen Neary, brothers William “Bill” Burke, Edward “Ed” Burke and John Desmond “Des” Burke and their families. John will also be missed by brother-in-law Norman “Norm” Spark and family and the many people that knew him.

Preceding him in death are his parents Rose and James “Jim” Burke, his sisters Mary Louise “Louise” McNeil and Sheilah Burke, and brother Leonard “Len” Burke, as well as his youngest grandson Robert Burke (aka Robert Hande) at the age of 17.

John was born September 22, 1946, in St. Johns, NL. He joined the Canadian Military and upon finishing his basic training, he was posted to Calgary in 1968 with the Princess Patricia’s Canadian Light Infantry (1PPCLI) where he retired in 1989 as a Sergeant. His second career focused on working at the Alberta Children’s Hospital and then the Rockyview Hospital in Material Management. Upon his final retirement, John cruised/travelled extensively with his wife and then spent ten years full time RV’ing in Canada and the US before settling down in Lethbridge, AB.

John’s goal was always to return to Newfoundland. His cremated remains will be laid to rest alongside his parents in Newfoundland where a small intimate service will be held with family.

In lieu of flowers, donations may be made to Streets Alive Mission in Lethbridge, AB or your local homeless/street people charitable organization, directly or online through www.canadahelps.org