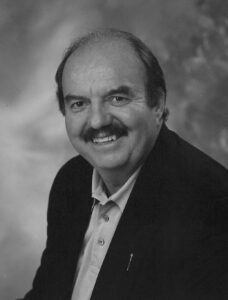 It is with profound sadness that the family of Clint Dunford shares the news of his unexpected passing on October 14, 2021 at the age of 78 years. He is dearly missed by his wife, Gwen Green, his son Ryan (Kristin) and three stepsons, Reg (Nicky), Dave (Patty), and Russ (Caroline) Bibby as well as his nine grandchildren. He is also survived by his brother Warren (Cheryle) and his sister, Elaine in Leamington, OT and numerous cousins, nieces and nephews.

Clint passed away suddenly from cardiac arrest due to complications in the treatment of COVID-19. He always anticipated that the cancer he battled for 16 years would lead to his death. Amazingly, as a result of his participation in a successful clinical trial with the Multiple Myeloma team at the Tom Baker Cancer Centre, his cancer was in remission at the time of his passing.

Clint was born in Dauphin, MB where his father was stationed during WWII. After the war, the family returned to the faming community of Portreeve, NW of Swift Current, SK where they purchased and operated the Dunford General Store. Clint was always proud of being raised in the back of the store. It was through the involvement in the store that values of kindness, honesty, responsibility and community service were cultivated. He had happy childhood along with his brother and sister. His parents had a profound influence on his life. Both were pillars of the community.

Clint left Saskatchewan in 1962 to attend the University of Alberta, Calgary (UAC). It was there that he got his first taste of activism in the push for autonomy for the U of C. He graduated with a B.A in Economics in 1966 from the U of C.

Clint’s work life falls into three distinct fifteen-year periods. From 1966-1981 Clint succeeded in the field of Industrial Relations/Human Resource Management with two American Multi – Nationals, first with Firestone in Calgary, then with Dresser Industries in Lethbridge.

In 1981 he formed his own consulting company specializing in labour relations and marketing. Most of his time involved collective bargaining, arbitration and mediation but he often took on unrelated projects that looked interesting to him.

Involvement in public life was never part of his vision for himself. He became a candidate for the Lethbridge West Progressive Conservatives in 1993 as others seemed reluctant to step forward. Because he had volunteered with the Association for many years, politics was not new to him. Once elected he worked hard as an MLA for the constituents in Lethbridge West and as a Minister of the Crown for all Albertans. He served as Minister of Advanced Education, Minister of Human Resources and Employment and as Minister of Economic Development. He considered it a great honour to be the elected representative of the people of Lethbridge West and was very grateful for the opportunity he was given to serve.

Throughout Clint’s adult life he was actively involved in many community organizations. Among other things he was a Director of Junior Achievement for 15 years; he served 3 terms as a Director with the Lethbridge Chamber of Commerce. He was a Rotarian. Most recently he was on the advisory board of the Dhillon School of Business at the U of L.

In 2002 as Minister of Human Resources and Employment Clint was named one of Alberta’s 50 most influential people by the Venture Magazine for his focus on workplace safety.

In 2011 the University of Lethbridge awarded Clint an Honorary Doctorate degree in recognition of his service to the community and to the province.

Clint was a risktaker; he could be flamboyant. He had a creative mind that was always thinking of ideas for new projects. He had a genuine interest in people. He was a friend to many. He never knew a stranger.

Clint faced his journey with cancer with unwavering optimism. The cancer weakened his body but never his resolve and incredible zest for life. Many thanks to all of the health care providers who assisted him over the years. A special thank you to Dr. Bhalis, Dr. Neri and nurse Anna at the Tom Baker Cancer Centre.

A celebration of a life well lived will be held at 2:00 pm on Thursday, July 21, 2022 at the SANDMAN SIGNATURE LETHBRIDGE LODGE, 320 Scenic Dr S, Lethbridge, AB.

If so desired, a memorial tribute, in lieu of flowers, can be made to the Alberta Cancer Foundation, 710, 10123- 99 Street NW, Edmonton T5J 3H1; albertacancer.ca