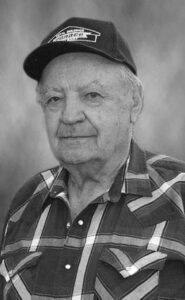 MIKE SCHNEYDER Jr., of Magrath, passed away at Good Samaritans Garden Vista on Tuesday, July 26, 2022 at the age of 91 years.

Mike was born at home in December 1930. He attended school through Grade 8, at which point his help was needed full-time on the farm.

In 1951, he married Margaret Szabo and they settled on their farm west of Magrath to raise their family. Mike was a successful farmer raising grain crops, cattle and sheep. He was also one of the first to import Simmental cattle into Canada.

In 1983, Mike and Margaret moved to a home in Magrath. Even though Mike was “retired,” he spent many hours at the farms helping or watching from his truck to make sure everything was going smoothly.

In his later years, he and Margaret resided in Diamond Willow and later moved to Good Samaritans where he spent his final years.

He was a great dad, grandfather and great-grandfather, always loved and forever missed.

Following Mike’s wishes, no formal funeral service will be held.

One Condolence for “SCHNEYDER, Mike Jr.”