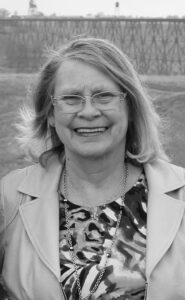 LINDA LEE BELISLE passed away at dawn, July 30, 2022, in Lethbridge with her loving husband, David, by her side. She was born in Lethbridge on February 16, 1949, the second child of Jim and Thelma Blackmer, and was raised on the family farm, near Coutts, with her seven siblings.

While attending high school in Milk River she met the love of her life, David Belisle. After her graduation they were married and moved to the Belisle farm near Masinasin where they raised their children, crops and cows. Linda was active in the community, volunteering with the Catholic Women’s League, starting a ceramic club, advocating for a kindergarten program at the Masinasin School, playing piano at church as well as curling and golfing with friends and family. Linda enjoyed travel – which included glamping, spending time in Whitefish and touring tropical destinations. After retirement, Linda became an avid Lethbridge Hurricanes fan — this included being a season ticket holder and proudly wearing her Hurricanes jersey to every game.

Over the years Linda kept busy — managing a restaurant, teaching piano lessons, driving school bus and working in a bank, but she always had a desire to work in health care. In the late 1990s Linda went to Lethbridge College to become a health care aide. After working in several facilities in southern Alberta, and retiring from farming in 2002, David and Linda moved to Lethbridge. Linda found her dream job working in palliative care at St. Michael’s Health Centre. Linda worked there until she retired in 2014 and several of her St. Michael’s co-workers supported her when she was placed in care in April.

Linda was predeceased by her parents; infant son, Kevin; brothers Jim and David and sister-in-law Linda. The family would like to thank the excellent care and support provided to her by the staff at St. Michael’s and Edith Cavell Care Centres during these last four months.

A Celebration of Linda’s Life will take place at ST. PETER’S CHURCH, 301 Main St. NW, Milk River, AB on Saturday, August 6, 2022 at 10 A.M. Interment will take place in the Allerston Cemetery with a Reception to follow in Milk River. If you wish to honour Linda’s memory, in lieu of flowers, please consider a donation to the Alzheimer Society of Canada.

One Condolence for “BELISLE, Linda Lee”