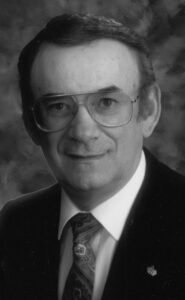 MARVIN ROBERT “MOUSE” MOSER of Lethbridge, beloved husband of wife Jeanette, passed away with his family by his side on Saturday, July 30, 2022 at the age of 83 years.

Mouse was born on October 1, 1938 in the Old Galt Hospital to Audrey and Albert Moser; the third of nine children. Mouse told many stories about growing up in a large family on the north side of Lethbridge.

Mouse and Jeanette met in 1971 and blended two families with five children within a three-year age span. They married on July 2, 1976 at Chapel of the Bells in Las Vegas Nevada and had over 50 years of happiness together.

Mouse was predeceased by his parents Audrey and Albert Moser, his in-laws Clifford and Ethel Schmidt, son-in-law Evan Olson, as well as his siblings and their spouses: Maurice Moser, Paulette and Bruce Park, Patsy Hamilton, and also his special aunt Jeanette Lewko.

Mouse was an animated character who, if you ever met him, you never forgot. He was always quick to tell a joke, and had a wonderful knack for remembering people, which carried him far in his sales career, including the jewelry and RV business over the years.

Mouse was also an avid sportsman. He enjoyed hunting and fishing, and held the Alberta record for largest caribou for 16 years. Two of his other true passions were fastball and hockey. Mouse was also a very talented musician, and he spent many hours playing guitar and jamming with friends. He and Jeanette spent 12 great winters together in Yuma, Arizona and formed many friendships there. They also travelled extensively to many other locations over the years. He was a proud winemaker and loved to share with family and friends. He entertained everyone and was always quick to say “Well I’m a gonna tell you!” and start in on a story. He will be missed by all.

A Celebration of Mouse’s Life will be held at CORNERSTONE FUNERAL HOME, 2825 32 St. S, Lethbridge, Alta. on Thursday, August 4, 2022 at 11 A.M. Reception to follow at the Italian Canadian Club. The service will be livestreamed and may be accessed via Mouse’s obituary on the Cornerstone website.

In lieu of flowers, donations can be made to the Canadian Cancer Society or the charity of your choice.