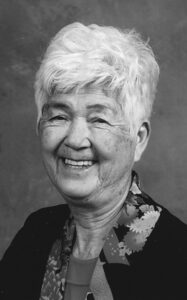 LILLY MUTSUKO OISHI, nee Mori, passed away on Friday, July 29, 2022 at Chinook Regional Hospital at the age of 93 years from complications related to congestive heart failure.

She was a woman of joy and optimism who believed that every day was a good day. She was constant in expressing her gratitude to others, and always encouraged friends and family to try new things with her catchphrase, “What the heck, just give it a try.”

Born June 2, 1929 in Newton, BC, Lilly was the sixth of ten children of Shinkichi and Suna Mori. Lilly’s family operated a successful strawberry farm. In 1942, as a result of World War II, the family farm was confiscated. At the age of 13, she and her family were evacuated to Southern Alberta and worked the sugar beet fields. Lilly trained and worked as a lab technician in Chicago. She returned to Lethbridge in 1957 where she met Yosh.

Lilly was an active member of the community and always enjoyed sharing her knowledge, meeting new people and catching up with old friends. She volunteered for a variety of organizations, was a director of the Alberta Cultural Heritage Foundation, and was a founding member of the Southern Alberta Ethnic Association recognized for outstanding service with a Life Long Membership Award in 2019.

Lilly had a passion for Japanese culture. She studied the Shinpa Seizan school of ikebana (flower arranging) for over 50 years. She helped to organize and was the first president of the Momiji Dancers. In 1987, Lilly formed the Japanese Heritage (Bunka) Society in order to promote and share Japanese culture with others. Lilly taught Japanese cooking at the Lethbridge Community College.

Lilly was well known for her culinary skills and hospitality. From Japanese dignitaries and basketball teams to rockstars and family reunions, Lilly cooked for them all. For her, cooking was an expression of love and a way to bring people together.

Lilly is survived by her sister, Amy Sakurai of Aurora, Colorado; brother, Albert Mori of Burnaby, BC; and sister-in-law, Sheila Mori of BC. Lilly is predeceased by brothers Toshiaki, Kuts, Bob, and Mick, and sisters Shinako, Terry and Susie.

The family thanks Dr. Leam, the staff of the St. Michael’s Health Centre, and the Chinook Regional Hospital for their care and concern. Char Friesen of AHS was a special comfort in sharing her expertise to help the family navigate care options for Lilly. Kind guidance was offered by the Buddhist Temple of Southern Alberta and by Salmon and Sons Funeral Home.

On Sunday, August 7, 2022, Meet the Family will begin at 1:00pm followed by a Funeral Service at 2:00pm at the Buddhist Temple of Southern Alberta at 470 40 Street South, Lethbridge with Rev. Izumi officiating. Interment will be held at a later date.

In lieu of koden or flowers, the family asks that donations be given to the St. Michael’s Health Centre in ℅ Covenant Foundation, Room 3C60, 11111 Jasper Avenue, Edmonton, AB, T5K 0L4 www.covenantfoundation.ca or the Buddhist Temple of Southern Alberta, 470 40 Street South, Lethbridge, AB T1J 3Z5 or a charity of choice.

One Condolence for “OISHI, Lilly Mutsuko”