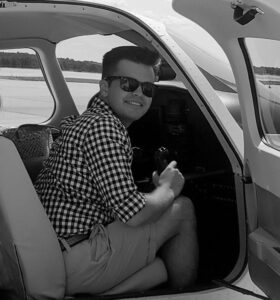 Raised in Fairfield, CT, Charlie attended Osborn Hill Elementary School and Roger Ludlowe Middle School. After completing his freshman year at Fairfield Ludlowe High School, he made the brave journey across the continent to Mill Bay, British Columbia to complete his high school education at Brentwood College School, his father’s alma mater. He was admitted to Bucknell University, graduating in May 2020 with a BA in Political Science.

Charlie had numerous interests and talents. Several weeks each summer were spent at his grandparents’ cottage on Gloucester Pool, where he honed his unique swimming style of bobbing with chin partially submerged. While he loved the water, Charlie lacked the necessary buoyancy to pursue swimming as a sport. Instead, he had the great fortune to meet Master KJ Ha of World Champion Tae Kwan Do in Fairfield. Through many years of dedication on the part of both master and student, Charlie was proud to achieve his second-degree black belt.

Leaving home for boarding school required a leap of faith, but Brentwood provided the environment in which Charlie truly began to excel academically, physically, artistically and socially. He joined the cross country running club and was proud after much dedication to move “from the shame of being stuck in the slow group to feeling confident as a solid member of the medium-slow group.” He tried his hand at rowing, competed on the debate team, and perhaps most importantly learned from his band of brothers in Rogers House to give and receive true friendship and to have confidence in his unique gifts. His time at Brentwood culminated in the ultimate honor of being elected by his classmates to give the valedictorian speech for the class of 2016. Delivered with his trademark combination of self-deprecation and sly wit, his final moments at Brentwood were spent walking from the stage wearing a giant smile, to an explosion of cheers and a standing ovation. At Bucknell, Charlie joined the Bison Battalion, Bucknell’s chapter of ROTC, completed Basic Camp at Fort Knox, founded the Bucknell chapter of Young Americans for Liberty, competed on the ski team, and discovered a gift for art and sculpture.

Aviation was Charlie’s overriding passion practically from birth. He read every flight book he could get his hands on, and was known occasionally to wear one on his head for transcranial absorption of knowledge. As a young teenager he built an actual flight simulator and developed a love for flying remote control planes, but the real fun began when he took his first flying lessons at Three Wing Aviation in Stratford, CT. He continued his training throughout college in Williamsport, PA, soloing in August of 2017. Facing a complete lack of demand for pilots during the early phase of the pandemic, Charlie doggedly, yet cheerfully, pursued his dream of becoming a professional pilot, earning various advanced ratings and qualifying as a Commercial Pilot and Certified Flight Instructor before landing a job in May 2021 as a flight instructor at Flightgest Academy at the Raleigh-Durham Airport. He was greatly admired by his students and colleagues for his teaching style. His celebrated whiteboard drawings made even the most complex concepts both humorous and easy to understand; many have been photographed and preserved by his fellow instructors. In April 2022, Charlie accepted his dream job as a First Officer with Rampart Aviation, a specialist contractor primarily conducting support operations for the Department of Defense. He was very proud of the company and pleased to announce to his family that he had earned the nickname “Tuna,” signaling his full acceptance as part of the Rampart team. When not on the job, Charlie fused his love for art, technology and aviation, producing custom designed, 3-D printed components that he shipped to other flight simulator enthusiasts around the world.

The resume of Charlie’s life could never fully describe the legacy he leaves. He was guided always by a strong moral compass; a fierce love for and loyalty to his family and friends; and a heart that was open and forgiving. He gave everyone a chance. His sense of humor was legendary – the far side of The Far Side. As a boy he insisted on being the Batmobile in proud and practical support of his younger brother’s and sister’s Batman and Robin for Halloween. Charlie reveled in the eclectic, with a taste in music that ranged from bossa nova to King Gizzard and the Wizard Lizard. Without guile or affectation, he nonetheless enjoyed putting on a suit for wine night with friends, sometimes with trademark aviator glasses and empty pipe, an inside joke. This spring he used his new regular paycheck to purchase a reliably unreliable 1978 Fiat convertible. He spent many hours and more than a few dollars trying to keep the car roadworthy while avoiding tetanus.

There was so much joy. Earlier this year he posted an update to friends on Instagram that began “Long time, no life updates so here’s the recap,” and ended with “This has been a very eventful year, and while there have been challenges, I’m the happiest I’ve ever been in my life and I wouldn’t trade places with anyone in the world.” Charlie’s wonderful friends in Chapel Hill, aka The Terrace Club, were central to his sense of fulfillment and belonging. Only days before his death, Charlie shared with his parents that he was exactly where he wanted to be doing exactly what he wanted to do. Not many get the chance to live that way.

The funeral service will be held on Saturday, August 13th at 11am at Christ & Holy Trinity Episcopal Church, 75 Church Lane, Westport, CT. A reception will be held in Branson Hall in the church immediately following the service. In lieu of flowers, the family asks that donations be sent to the charity Above the Clouds (abovethe cloudskids.org).