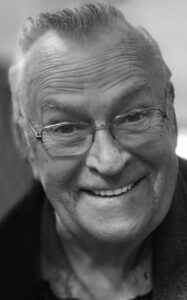 Mr. Rex Seely of Lethbridge, beloved husband of the late Mrs. Theresa Seely, passed away peacefully in his sleep at home on Tuesday, August 16, 2022 at the age of 78 years.

Rex was born in Lethbridge and was raised and educated in Stirling. His early years were filled with various jobs such as driving tractor for a local farmer, seeding and doing summer-fallow as well as working for a corral-cleaning outfit. He also worked on a road crew building the new highway between Warner and Milk River.

Milk River is where he began what would become his life-long career – he started/finished an apprenticeship with a local plumbing and gas fitting company. This led to working for a large commercial mechanical contracting firm in Lethbridge, where a couple of the projects that he worked on were the new wing of St. Michael’s Hospital and the Green Acres Seniors Lodge in Lethbridge. In 1964, he transferred within this company to Calgary with his wife Theresa, where he worked on numerous schools, hotels and other large buildings.

In 1968 he moved to the Queen Charlotte Islands in British Columbia to work on the construction of a Department of National Defense installation in Massett and the new Prince Rupert hospital. His family followed him to BC in 1969. Once these projects were completed in 1970, he and his family returned to live in Stirling where he worked on the new Physical Education Building at the University of Lethbridge. With Winter coming and typical Winter layoffs with it, he branched out and ran his own plumbing and gas fitting business for a couple of years.

Wanting a change, he drove highway tractor for a company in Taber for a couple of years. This soon gave way to returning to the plumbing trade in 1974, where he worked on four new specialized buildings at the Lethbridge Research Station.

His final working phase was with Government of Alberta in 1976. He started out as a Plumbing and Gas inspector. Much of his time was spent working in Provincial Regulatory Committees and for 23 years he was Alberta’s representative on a National CSA Standards Committee. After the implementation of the Safety Services Act, in 1996 he became an Auditor to oversee the contractual obligations of the new Private Inspection Companies. He retired in 2009 with more than 32 years of service with the Provincial Government.

Over the years his hobbies/passions have included hobby-farming, playing guitar, camping, scuba diving, mountain climbing, sky diving, Volunteer Fire Fighting / Fire Chief and tens of thousands of kilometres riding his motorcycles with his dog Muffy. Most recently would be making, singing and playing in his own YouTube channel videos with his dear friend and favourite singing partner Patty Moyer.

Rex is survived by his two sons, Layne and Allen; granddaughters Christina, Kiamana and Jazmina and grandson Alexander and his older sister Eve Eagleson.

Rex’s parents, his wife of 34 years Theresa, and older brother Merve; all preceded him in death

A Funeral Service will be held at 10:00 am, on Friday, August 26, 2022 at MARTIN BROTHERS RIVERVIEW CHAPEL, 610- 4 STREET SOUTH, Lethbridge, Alberta, with Reverend Trevor Potter, officiating.

Interment will follow at the Stirling Memorial Cemetery, Stirling, Alberta.

To watch the service via livestream, please go to https://www.mbfunerals.com/obituary/Rex-Seely and scroll to the bottom of the obituary page to find the link.