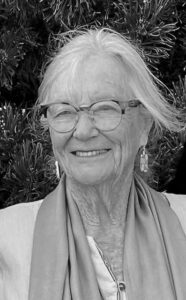 “There are many wonderful places in the world, but one of my favorite places is on the back of my horse.” (Rolf Kopfle)

She had time to look out the windows and watch her horses grazing as she said her final goodbyes. She went peacefully while holding hands with Ike, as they had done for 65 years.

Family and friendship were the pillar of Diana’s life. She left this world after having been visited, called, written to and nourished by so many of those who loved her. Her sons, Addison and Rod and his wife Lori, cared for her at home, while her son Will called from Africa to check on her and surely her son David is waiting for her in the hereafter. Even her four cherished grandchildren: Zoey, Mark, Paul and Quinn, were able to spend precious moments with her.

Diana grew up on the back of a horse in Turner Valley with 2 siblings: Donna and Rod. It was this deeply rooted love of horses that shaped so much of her life and even brought her Ike, who won her heart by taking her to a horse show on their first date and later swept her off her feet at the Trianon Gallery dances. Family roots played a big part in the woman she became. She honored her family history and wove culture and traditions into life while including friends. She shared Trader King, pioneering and Ike’s Kentucky influences in a way that made you curious to know more. She hiked and rode the trails her father forged, she upheld the traditions started by both families and especially embraced Ike’s by baking the best corn bread and diligently following the Derby races each season.

Diana was a woman who knew herself and those who loved her knew her loves. Many of her closest friendships were made while in the company of horses. others, naturally blossomed in the pursuit of her varied interests. She had an unlimited capacity for friendship and anyone in her inner circle felt a deep and intimate connection. She had a way about her that made others feel special and treasured. She was easy to adore as she made others feel so adored. She shared fun and adventures with so many people. Her genuine sense of wonder and willingness to give everything a try was contagious. She was transparent, extraordinarily honest and accepting. Unknowingly, she inspired many as their role model.

Always a gracious hostess and provider, even when times were tight, she would be pragmatic, see the positive and find creative ways to share her sense of abundance to nurture those around her. The simple pleasure of picketing the grazing horses while sipping a five o’clock glass of red wine was enjoyed by many. Her culinary talents fed countless guests over the years, but the family favorites included: roasted ham or beef, game bird, corn bread and Nana’s fried eggs alongside Ike’s Sunday pancakes with maple syrup. Her quirky personal favorites were Brussel sprouts or peanut butter-banana-mayonnaise sandwiches but that is more of an acquired taste!

Diana’s home was your home. She made others feel comfortable, not only in her home but also about themselves. Home personified her unique sense of elegance, grace and easygoingness. She had an eye for style, beauty and a deep love of art that enriched her life. Her love of art was not only expressed in the art that filled her life but in her passionate support of local artists, her tireless connection with the SAAG and travel that took her and Ike to exhibits around the globe.

Diana embodied an attitude of gratitude long before it became a trend. She rarely missed an opportunity to send a message or make a call to express her thanks for someone’s efforts. So, even in this final tribute, from her to you: “Thank you for the lifetime of connection, especially these past weeks. Thank you for the visits, calls, messages, flowers, meals, soup, baking, cards, heartfelt words, laughs and showering me with kindness.” To all who loved her; know that she departed with her heart full from a life well lived; hold her in your heart, saddle up and ride on.

In lieu of cards or flowers, a memorial donation may be made in the name of Diana Lanier to: The Southern Alberta Art Gallery www.saag.ca/donate or Canadian Cancer Society –Lung Cancer Research 325 Manning Road NE #200, Calgary, AB T2E 2P5 www.cancer.ca

One Condolence for “LANIER, Diana”