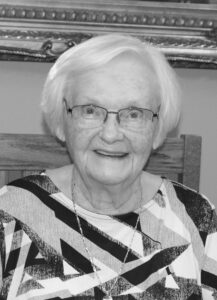 Evelyn was born at home in the Allerston district on December 30, 1923, to Peter and Rose Thielen. After attending school at different one-room schoolhouses in the 1930s, Evelyn ended her formal education. In January 1948, she married Leo Lodermeier and they began their life together in an old wooden farmhouse on land at Masinasin, east of Milk River, Alberta. Leo and Evelyn had a mixed farm of dry-land cropping and a few cows and chickens. It was a wonderful time in the 1950s when they built their lovely new home and had their two children, Teresa, born in 1955 and Darrell, born in 1957. Evelyn was a devoted mother and homemaker. She enjoyed many fibre arts including knitting, sewing, and embroidery. Evelyn was also an accomplished baker and wedding cake decorator. In 1981 Evelyn and Leo retired to Lethbridge where she spent many happy years baking buns, making clothes, and babysitting her granddaughters. After Leo’s death, Evelyn moved to Martha’s House where she spent her sunset years.

A Graveside Service will be held at 9:40 AM, at Allerston Cemetery on Sunday, August 28, 2022. Followed by a memorial reception at Allerston Hall.”

One Condolence for “LODERMEIER, Evelyn”