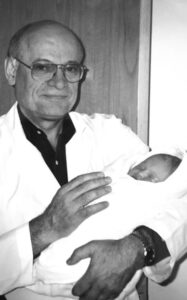 From the time his eldest brother Gary announced he wanted to become a physician, Hugh determined that medicine would be his path as well. For 36 dedicated years, Dr Hugh Verlin Stewart practiced Medicine in Southern Alberta, impacting thousands of patients and colleagues. On Tuesday, August 30, 2022, at the age of 75, Dr Stewart passed away peacefully, surrounded by his family.

Hugh was born on a bitter, cold December 3rd of 1946, the third of 5 boys to Karless “Curly” and Della Jensen Stewart. Growing up on the family farm in Jefferson, AB for most of his childhood, he lived a full and busy life. Helping with chores, playing sports, and reading were among his favourite pastimes. He graduated from Cardston High School, then attended Mount Royal College. His drive to pursue Medicine never wavered and he graduated from Medical School from the University of Alberta in 1970. He completed his internship in Calgary at Holy Cross Hospital before he and his first wife Ramona moved to Cardston to raise their growing family. Hugh made sure they took time to enjoy the great outdoors. Canoeing, fishing and golfing trips, riding dirt bikes at the farm, and trips to Waterton and Gabriola are cherished memories with his children.

As well as being a devoted doctor, Hugh enjoyed serving his community. In Cardston, he was elected to the Town Council and fulfilled a 5 year term. After moving to Lethbridge, he achieved the status of Captain in the Canadian Forces and was a member of the 20th Independent Field Battery of the Royal Canadian Artillery. He served for 20 years in that capacity.

After 30 years of providing diligent and compassionate care to his patients at Family Medical Centre, Hugh’s own health issues forced his retirement in 2006. Gratefully, he could still enjoy a round of golf, a day of fishing, or a drive to the farm. He had fond memories of traveling, and especially loved the time he spent out at the Pacific Coast. A happy highlight occurred in December 2013 when he and Dora Castillo wed. They have enjoyed a lively life together, filled with laughter, many dog walks, watching Star Trek and outings with family and friends.

Left to mourn him are his devoted wife, Dora Castillo, his children Shannon (Brian) Gillis, Cameron (Ara Jorgenson), Bruce (Amy), Robert, Heather (Justin) Jubber; stepsons Igor (Lisa) Castillo and Boris (Mari) Arroyo, numerous grandchildren and 2 great grandchildren. He is survived by his brothers Calvin (Anne) and Randy (Lynda). He was predeceased by his parents, his brothers Gary and Donald and daughter in law Roxy Stewart.

The family would like to extend a sincere thank you to all those who assisted in any aspect of Hugh’s care, especially in his last days at the ICU in Lethbridge.

The Funeral Service will be held Wednesday September 7, 2022 at The Church of Jesus Christ of Latter-day Saints, FAIRMONT CHAPEL, 205 Fairmont Blvd South, Lethbridge at 11:00am. Friends may meet the family from 10-10:45, prior to the Service.