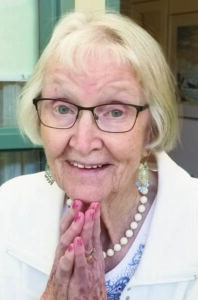 Dorothy K. Williams, beloved wife of the late Bob Williams, passed away in Taber on Sunday, September 4, 2022 at the age of 99 years.

The Funeral Service will be held at Southland Funeral Chapel, 5006 – 48 Avenue, Taber on Friday, September 9, 2022 at 2:00 P.M. Burial to follow at the Taber Memorial Garden. Condolences may be forwarded by visiting our website at www.southlandfuneral.com [1].

Dorothy is survived by her two daughters Christine of Taber and her children Diane (Russell) Arsenault (their children Maija, Mark, Amaris and Aiden), Anthony (Pearl) Bastiaansen (their children Jacobus and

She was predeceased by her husband Bob; parents Frederick and Hilda Brown; mother and father-in-law Velma and Billy Williams, all seven of her siblings and their spouses as well as Bob’s siblings.

Dorothy was born in Reading, Berk, England on October 29, 1922 the third of eight children born to Frederick and Hilda (née Keymer) Brown.

Mom was an excellent seamstress for detailed projects, a natural skill which was developed at a tailoring position she got upon leaving school at age fourteen.  Wanting to expand her horizons, she moved on to a secretarial position that she loved at Huntley & Palmers’ Cookie Factory. This position was cut short when WWII broke out and she was needed in the Land Army to contribute to the war effort by being required to work in the fields planting various crops. WWII provided an excellent backdrop for Dorothy to engage in another of her passions, dancing.  She would entertain her family with tales of dancing the night away at the Olympia with soldiers home on leave. Halfway through the war, at one of these dance nights, she met a handsome soldier from Canada, who swept her off her feet, Bob Williams, who would become her husband on August 26, 1944.

After the war Dorothy sailed to Canada, as a war bride aboard the Ile de France troop carrier landing first at Pier 21 Halifax, Nova Scotia.

Dorothy then journeyed by rail to Taber where she met the rest of Bob’s family. To her chagrin there were no trees, or running water. Bob and Dorothy had two daughter’s Christine and Sheila. They then moved to their farm in the Fincastle area where they made a home for many years.

It was during her years on the farm that Dorothy indulged and excelled at some of her many creative talents, painting, sculpting and copper work.  In the mid 1980’s they retired to live in Taber where she became active in St. Theodore’s Anglican Church, playing cards with friends and acquaintances.

After Bob passed in 1995 Dorothy moved to a new condo at Signature Point, a place she was very proud of and which afforded her the opportunity to meet new card players and friends. She loved to travel to visit relatives on Vancouver Island, Alberta, Saskatchewan, Mexico, Hawaii and trips home to England. For mom, family was always first and foremost. She liked nothing better than to whip up one of her excellent meals, or bring out some baking to feed them, AND to entertain them with stories of her life and to play cards.

If friends so desire, memorial tributes in Dorothy’s name may be made directly to Royal Canadian Legion Branch 20, 5205 – 48 Avenue, Taber, Alberta T1G 1S8.