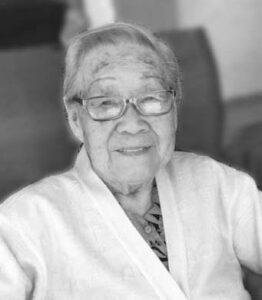 Kit Yee Lau of Lethbridge, Alberta, beloved wife of the late Yeung Lau, graduated to Heaven at the youthful age of 101 years old, on September 9, 2022, at 4:45 am at St. Michael’s Health Centre.

Kit Yee will be forever remembered by her family and friends with great love and fondness.

She was born on July 27, 1921, in Canton China. At the age of 21, she married her late husband Yeung Lau, who passed away in November 1981. Together, they moved to Hong Kong in 1946 seeking opportunities. Kit Yee worked as a seamstress at various factories, while Yeung worked as a security guard at the Hong Kong Airport.

In August of 1970, Kit Yee, Yeung, and six of their children immigrated to Lethbridge, Alberta. Shortly after, Kit Yee and Yeung moved to Vancouver, BC for 10 years, where Kit Yee retired at 65 years old as a seamstress at Janzen Garment Factory.

After her retirement, she travelled by plane or greyhound bus, periodically residing amongst her children in San Francisco, Hong Kong, Vancouver, Calgary, and Lethbridge. She eventually settled in Lethbridge at The Garden View Lodge at the age of 90.

She was also a cherished member of both the Calgary & Lethbridge Chinese Alliance Church.

She was predeceased by her son, Chun Dok Lau, as well as sons-in-law Edward Choy and Dan Ng.

To watch the service via livestream, please go to https://www.mbfunerals.com/obituary/Kit-Lau and scroll to the bottom of the obituary page. The family invites anyone who wishes to leave a written condolence, share a memory or upload a photo Kit Yee’s tribute wall.