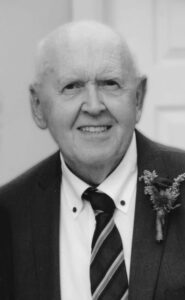 “I have fought long and hard for my Lord, and through it all, I have kept true to him. And now the time has come for me to stop fighting and rest. In heaven, a crown is waiting for me, which the Lord, the righteous Judge, will give me on that great day of his return. And not just to me but to all those whose lives show that they are eagerly looking forward to his coming back again.”

On Thursday, September 15th, our dear Gerald, surrounded by his family, found rest in the arms of our Lord.

Gerald was born on a cold, wintry day, February 16th, 1950, to Peter D. Keryluk (predeceased) and Zenovia Keryluk (Karbashewski) in the Town of Two Hills, Alberta. He was the oldest of nine. When he was born, his parents had no vehicle, and so they were driven to the hospital by a neighbour. Gerald lived in a small house surrounded by farmland, with no running water and a wood stove. His family has deep Ukrainian roots, and Gerald grew up eating borscht, pyrohy, holubtsi, lots of sauerkraut, and pork. He loved his mother’s cinnamon buns and doughnuts.

He grew up farming, and his love of the land is reflected in the degrees he took, first at the University of Alberta (BSc Biochemistry) and, afterward, at the University of Saskatchewan (MSc Food Science). It was from his mother, who, after raising nine children and running a farm, gained her RN and then BSc that he got his love of learning. This was not limited to science; he loved books, poetry, and languages. He took Ukrainian at university, but after university he also studied Russian, and several European languages and Chinese. He worked for 44 years at the Lethbridge Research Station (Agriculture Canada), and he always found it a joy to work with students and help them in any way he could to achieve their educational and career goals. He particularly enjoyed working with colleagues from other cultures, such as China and India.

In 1975, he met his future wife Ruth Scott from England who was visiting relatives in Lethbridge, and they were married the following year. They were together for 46 happy and blessed years. More than anything else on this earth, he loved his children and grandchildren. He took a great interest in his children’s education, and he was delighted when they all found fulfilling career paths. Nothing made him happier than encouraging young people in their studies. Having grandchildren was the crown of a life well lived. Leo, Jackson, and Scarlet were so loved and were so precious to him. Gerald always said he wanted to live to be 100, but that was because he wanted to spend more time with them. Nothing could surpass the love Gerald had for his Lord and Saviour, Jesus Christ. He read his many Bibles daily and loved having theological discussions. He was a truly spiritual man, a man of strong and committed faith.

He is survived by his wife, Ruth Kereliuk, children John-James Kereliuk (Courtney) Jackson and Scarlet; Andrew Kereliuk (Robyn) Leo; Ann-Elise Leal (Jordan) all of Lethbridge, AB; his mother, Zenovia of Two Hills; his brothers, James of Dauphin, MB (Carolyn deceased), Christian and Jaime Lynne; Brent of Two Hills, AB, Janine and Jacqueline; and Glenn of Vancouver, BC (Jay); sisters, Arlene of Edmonton, AB (Gene), Kevin, Joel, Philip, and David; Myrna deceased, Reid, and Neil; and Lana of Beaver County (Rodney) Lindsey, Lauren, and Luke; Christine of Vegreville, Nick; Tracy of Vegreville, Jesse. Gerald also has many aunts, uncles, and cousins and other extended family, some of whom have predeceased him and some of whom are still here. All of his family, in some way, helped form this very special man.

One of his passions was music of every kind he loved hymns and Gospel music and enjoyed rock, country and classical. He could play the piano and tenor, alto, and soprano recorders, and he loved to sing. Like most Ukrainians, he enjoyed nothing more than a good wedding and he could dance a mean polka. He was gentle, educated, and deeply spiritual. His love for his family was immense. We will never forget you, Gerald. You will be in our hearts forever!

The family would like to thank his GP Dr. Aramide, his Oncologist Dr. Albaba, his Orthopedic Oncologist Dr. Monument, Medical Oncologist Dr. Yip, the staff at the Jack Ady Cancer Centre, particularly the chemotherapy staff, the staff of ward 4 C, especially Matthew Pigeau, the kind and compassionate staff of St. Michael’s Health Centre who made Gerald’s last days so comfortable, and we send out a special thank you to Dr. Smuts and Nurse BJ of Palliative care. You both always went above and beyond for Gerald, and you never gave up hope. Thank you to the people of St. Augustine’s, to Rev. Steve Bateman and Rev. Dr. Gillian Breckenridge, and to all the people who prayed and hoped during Gerald’s illness.

A Funeral Service will be held at ST. AUGUSTINE’S ANGLICAN CHURCH, 411 – 11 Street South, Lethbridge, AB, on Friday, September 23, 2022 at 10:00 A.M. with Rev. Steve Bateman and Rev. Dr. Gillian Breckenridge officiating. The service will be livestreamed and may be accessed via Gerald’s obituary on the Cornerstone website.

Following the service, Gerald will be laid to rest in Royal View Cemetery.

Donations can be made to any of the following: Chinook Regional Hospital Foundation c/o Jack Ady Cancer Centre, 960-19th St. S, Lethbridge, AB T1J 1W5, the Lethbridge Interfaith Foodbank, 1103 – 3 Ave N, Lethbridge, AB, or to a student educational institution of your choice.