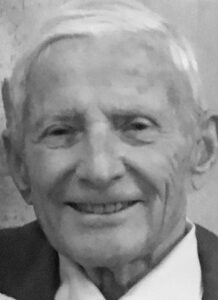 Siegfried (Sieg) Stein of Lethbridge, beloved husband of Isobel, passed away at Chinook Regional Hospital of an abdominal aortic aneurysm on August 11, 2022 at the age of 95 years.

Sieg was born in Puente de Vallecas, Madrid, Spain on August 4, 1927, to Leopold and Magdalene Stein. At two years of age, he moved to Germany. He went to military school and at age 17 was sent to war. He was taken prisoner by the British where he was billeted in Scotland until 1948. There he met his wife Isobel in Dundee, Scotland, and they were married in September 1951.

In November 1954 Sieg and Isobel immigrated to Canada, landing in Montreal, and took a three-day train ride to Lethbridge. They built a home in Coaldale where they resided until they moved to Lethbridge in 2016. Sieg worked for Art Batty Construction as a truck driver until 1963, when he bought a gravel truck and worked as an owner/operator in road construction until his retirement at age 65.

In his younger years, Sieg enjoyed skiing, camping, hiking and travelling to Scotland, Germany, Mexico, Texas and Hawaii. Sieg was a long-time member of the German Canadian Club and their shooting group.

There will be a Come and Go Celebration of Life from 1:00 pm to 4:00 pm on Friday, September 30, 2022, in the Anton’s Ballroom, Sandman Signature Lethbridge Lodge, 320 Scenic Drive S, Lethbridge.