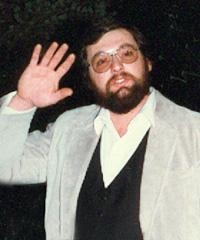 Stanley ”Stan” James Ziebart passed away at the age of 56 years, beloved father of Alicia Ziebart of Edmonton and Jeremy Ziebart of Calgary; as well as Stan’s wife Roxanne Ziebart of Medicine Hat.
He also leaves to cherish his memory his mother, Shirley Ann Ziebart of Medicine Hat; four sisters, Janet (Jim) Zeller of Irvine, Kate Ziebart of Calgary, Donna (Richard) Dworschak and Beth (Robert) Leentvaar all of Medicine Hat; his very special uncle, Jerry (Jean) Ziebart of Medicine Hat; one sister-in-law, Garnet (Jerome) Nunweiler of Eatonia; three brothers-in-law, Marvin (Val) Stotz of Medicine Hat, Randy (Lorraine) Stotz of Medicine Hat and Robin (Laurie) Stotz of Saskatoon, as well as numerous nieces and nephews. He was predeceased by his father, Pius “Zeke” Ziebart in 2009. A private graveside service will be held at Hillside Cemetery on Thursday, September 6, 2012 at 1:30 p.m. with Rev. Barrett Scheske officiating. Those who wish to attend the graveside service are asked to meet at the main gate to Hillside Cemetery at 1:15 p.m. The family respectfully request no flowers. To e-mail an expression of sympathy, please direct it to: pattfh@telusplanet.net subject heading: Stanley Ziebart, or you may visit www.gonebutnotforgotten.ca and leave a message of condolence.
Funeral Arrangements are by the PATTISON FUNERAL HOME AND CREMATORIUM 540 South Railway St. SE, Medicine Hat T1A 4C2