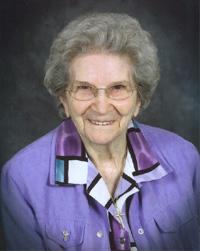 Emelia Feist of Medicine Hat, passed away on Tuesday, September 11, 2012, at the age of 97 years, beloved wife of the late Joseph Feist. She leaves to cherish her memory three children, Don (Jennette) Feist of Okotoks, Dolores Leahy of Gull Lake, Saskatchewan and Allan (Ida) Feist of Lethbridge; five grandchildren, Bonnie Kenny, Don Feist Jr., Dennis (Ronda) Leahy, Rick (Tessa) Feist and Natile (Jack) Trefan; four great grandchildren, Ashley Feist, Dallas Feist, Colton Leahy and Jade Feist; one brother, John (Ronnie) Jangula; three sisters, Katherine Rennie, Anne (Joe) Baier and Betty Grubowski as well as numerous nieces and nephews. She was predeceased by her parents, Katherine and Phillip Jangula; her stepmother, Elizabeth Jangula; her husband Joseph on February 18, 1973; many brothers, sisters and step brothers and sisters. Those who wish to pay their respects may do so at the PATTISON FUNERAL HOME on Thursday evening from 6:30 – 9:00 p.m. and at the church on Friday from 9:30 – 10:25 a.m. Family and friends will gather for prayers in the PATTISON CHAPEL on Thursday evening at 7:00 p.m. The funeral mass will be celebrated in the St. Patrick’s Roman Catholic Church (238 2nd Ave N.E.) on Friday, September 14, 2012 at 10:30 a.m. with the Very Reverend Fr. Long Vu celebrant. Interment will follow in the Hillside Cemetery. As an expression of sympathy donations may be made to the South Country Village, 1720 Bell Street SW, Medicine Hat, T1A 5G1. To e-mail an expression of sympathy, please direct it to: pattfh@telusplanet.net subject heading: Emelia Feist, or you may visit www.gonebutnotforgotten.ca and leave a message of condolence. Funeral Arrangements are by the PATTISON FUNERAL HOME AND CREMATORIUM 540 South Railway St. SE, Medicine Hat T1A 4C2

No Condolences for “FEIST”