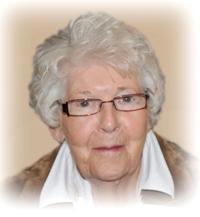 1921 ~ 2012
Mrs. Alfrieda Mantz of Medicine Hat, beloved wife of the late Harold Mantz, passed away with family by her side at the Medicine Hat Regional Hospital on Saturday, October 13, 2012, at the age of 90 years ~ four days shy of her 91st birthday.  Along with her very special friend, Gerry Rumohr and his family, Alfrieda leaves to cherish her memory:  two daughters, Randi (Dennis) Ulmer and Robin Yam (Jack Nicoll) both of Medicine Hat;  three grandchildren, Darli (David) McAulay and their children, Jordan, Sawyer, Cooper and Keetly of Lethbridge;  Tyler (Rachelle) Ulmer and their children, Abigail, Gracelyn and Kallum;  Dustin (Tannis) Ulmer and their children, Emeryson and Aspen all of Medicine Hat.  She will be remembered by two sisters, Marj (Jack) Sparrow and Doreen Butgereit;  one sister-in-law, Vi Mantz as well as numerous nieces and nephews.  Along with her husband, Harold, Alfrieda was predeceased by her parents, Andrew and Elizabeth Leidal;  five siblings, Bill (Jean) Leidal, Alfred (Violet) Leidal, Alvina (Ray) Meyers, Helen (Fred) Rutschke, Kenny (Joyce) Leidal;  one brother-in-law, Bob Butgereit as well as two nephews and numerous other extended family.  Alfrieda was born in Leader, Saskatchewan on October 17, 1921, and raised in Hilda, Alberta.  She will be forever remembered and loved by all those who knew her.  Those wishing to pay their respects may do so at Cook Southland Funeral Chapel, 901 – 13 Street S.W., Medicine Hat on Tuesday, October 16, 2012, between 7:00 P.M. and 8:00 P.M. as well as on Wednesday, October 17, 2012, starting one hour prior to the service.  A Celebration of Alfrieda’s life will be held at Cook Southland Funeral Chapel on Wednesday at 2:00 P.M. with Pastor Sidney Nelson officiating.  Interment will follow the reception in Cook Southland’s Reception Center.   (Condolences may be expressed by visiting www.cooksouthland.com)  If friends so desire, memorial tributes in Alfrieda’s name may be made directly towards the treatment of Lung Cancer;  the SPCA;  Persian Dreams & Canine Themes or to Save Old Souls.  Honoured to serve the family is Cook Southland Funeral Chapel, 901 – 13th Street S.W.   Medicine Hat, Alberta   T1A 4V4  Phone 403-527-6455