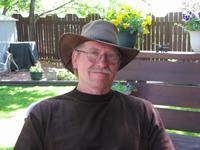 Mr. Glen Meidinger of Elkwater, passed away on Friday, October 19th, 2012 at the age of 68 years. Glen leaves to cherish his memory his mother, Marjorie Mayer; his sister-in-law, Carole Meidinger; two nephews, Darren (Michelle) Meidinger and Russ Meidinger; one niece, Tara (Rob) Watkins, and their families; two aunts, Valerie Schattle and Audrey (Fritz) Sandau, all of Medicine Hat; three cousins, Dudley Driscoll, Granger (Denise) Bertrand and Dana Schattle. Glen was predeceased by his father, Dan Meidinger; his brother, Calvin Meidinger; his sister, Fern Southward; his grandparents; and one aunt, Gloria Driscoll. Glen was born, raised and received his education in Medicine Hat. He was employed with the City of Medicine Hat for close to thirty years. Glen enjoyed the country and loved the simple life, residing in the Elkwater area for many years. His passion was the outdoors, hunting and fishing. Glen was a well-known wildlife artist; taxidermist for over forty years, as well as a photographer and painter. Over the years he won many awards for his art at local competitions. Physical fitness and personal health were very important to Glen and he enjoyed body building. Glen will be missed by his family and many friends. The Funeral Service will be held in ST. PAUL LUTHERAN CHURCH, 515 Sprague Way SE, on Tuesday, October 23rd, 2012 at 11:00 a.m. with Reverend Ken Edel officiating. Interment will follow in the Family Plot at Saamis Prairie View Cemetery. Memorial gifts in Glen’s memory may be made to the S.P.C.A., 55 Southwest Drive SW, Medicine Hat, Alberta, T1A 8E8. Condolences may be sent through www.saamis.com or www.gonebutnotforgotten.ca or to condolences@saamis.com subject heading Glen Meidinger. Radio funeral announcement can be heard on Monday around 12:35 p.m. on Power 93.7 fm. Funeral arrangements are entrusted to SAAMIS MEMORIAL FUNERAL CHAPEL AND CREMATORIUM, “The Chapel in the Park”, locally owned and directed. Should you wish any additional information, please telephone (403)528-2599