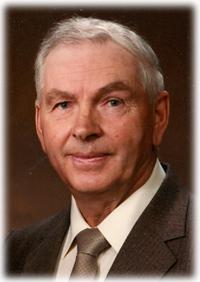 “Any man can be a Father, but it takes someone special to be a dad.”

Mr. Albert Pahl, beloved husband of the late, Mrs. Ruth Pahl, passed away in Medicine Hat on Sunday, October 21, 2012 ending a long battle fighting the complications of diabetes.  A resident of Medicine Hat and area all his life, Albert married Ruth Schultz in 1941. They settled just north of Irvine where they began their farming adventure.  In 1952, they moved to Medicine Hat with their two young daughters.  Farming continued in the Seven Persons and Whitla areas until retirement in 1974.  Dad worked hard all his life but he also liked to play hard.  He loved the ‘game’ whether playing cards, participating in curling, bowling or horseshoes or later on in life, watching his favorite sports (curling, hockey or baseball) on T.V.  Although rather shy and quiet most of the time, he could become quite competitive when a ‘win’ was on the line.  We will miss that special twinkle in his eye when he knew he had the winning hand.  Predeceased by his wife, Ruth of 59 years in 2000, Albert leaves behind two daughters, Marjorie Toews (Wes) and Sandra Murray (Dan);  four grandchildren, Shelley Nykolaishen (Mike), Shannon Brost (Blaine), Nathan Murray (Tracy), Jordan Murray (Alison);  six great-grandchildren, Reid Scholten, Nicona and Erica Brost, Addyson, Noah and Brooklynn Murray.  The youngest of nine children born to Christian and Justina Pahl, Albert was predeceased by his brothers Edward, John, and Gilf;  sisters, Lydia Herman, Bertha Weiss and Elizabeth Bauer.  Albert is survived by two sisters, Hilda Meier and Mary Nittel and sisters-in-law, Edith Pahl and Mildred Schultz as well as numerous nieces and nephews.  Special thanks to the caring staff at Chinook Village, Dr. Mastel and more recently to the Palliative Care Unit of the Medicine Hat Regional Hospital for the dignity and compassion shown to dad.  As per Albert’s request, there will be no formal funeral service held at this time.  In honour of his life, a private family memorial will be held at a later date.  (Condolences may be expressed by visiting www.cooksouthland.com).  If friends so desire, expressions of sympathy may be made in Albert’s name by donating directly to the charity of one’s choice.  Honoured to serve the family is Cook Southland Funeral Chapel, 901 – 13th Street S.W.   Medicine Hat, Alberta   T1A 4V4  Phone 403-527-6455

No Condolences for “ALBERT PAHL”