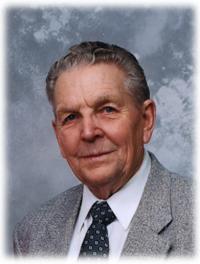 1921 ~ 2012
Donald Lawrence King beloved husband of Georgina M. King, passed away quietly and peacefully with his loving family by his side at the Medicine Hat Regional Hospital on Friday, November 2, 2012, at the age of 91 years.  In January 2013, Don and Georgina would have celebrated 68 years of marriage together.  Besides his loving wife, Georgina, Don is survived by his three daughters;  Myrna, Donna, Freda and their son, Douglas (Donna);  four grandchildren, five great-grandchildren and his sister, Laverna of London, ON.  Don made numerous life long friends along the way and will be missed by them all.  He farmed in the Melfort, SK., area (Pleasant Valley) for many years. Don was a noted entrepreneur and excelled as a specialty layout welder and machinist, offering invaluable service to the agricultural industry.  He loved his family and always made an extended effort to make sure there was enough quality time for everyone.  With a true passion for an outdoor lifestyle to include fishing and camping, Don and Georgina were true “snowbirds’ and spent many winters in the southern United States, making many friends along the way.  He had many favorite scriptures and passages from his Bible, but Don truly lived by his personal testament; that showing kindness to everyone.  A truly honest, loyal and kind man has left this world a great deal better because of his presence in it.  Don’s extended passion was to be kind and loving to others, with a strong spiritual compassion.  Those wishing to pay their respects may do so on Tuesday, November 6, 2012 from 5:00 pm to 6:00 pm.  The Funeral Service will take place at Cook Southland Funeral Chapel, 901 – 13 Street S.W., on Wednesdays, November 7, 2012 at 2:00 pm.  Private family Interment will take place at Hillside Cemetery.  (Condolences may be expressed by visiting www.cooksouthland.com)  Memorial donations in Donald’s name may be made directly to the Palliative Care Unit, Medicine Hat Regional Hospital, 666 – 5th Street S.W. Medicine Hat, Alberta, T1A 4H6. Honoured to serve the family is Cook Southland Funeral Chapel, 901 – 13 Street S.W., Medicine Hat, Alberta  T1A 4V4  Phone 403-527-6455.