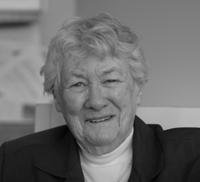 It is with great sadness that the Sobey family announces the sudden passing of Matilda Ann Elizabeth Sobey. Ann passed away peacefully on the morning of December 21st at Peace Arch Hospital in White Rock, BC at the age of 84. She is predeceased by her father, Robert John Fraser, her mother Tina Catherine Fraser and her brother Robert Fraser. Ann is survived by her husband of 54 years, Dr. Vernon Sobey, her two sons, Dr. Alan Sobey (Robina) of Edmonton, Alberta and Dr. Paul Sobey (Marilyn) of Surrey and Margaret Fraser (wife of Robert Fraser) of West River Station. She is survived by six grandchildren; Kassandra (Aaron Camponi), Kyle and Marissa Sobey of Edmonton and Matthew, Meagan and Kevin Sobey of Surrey. Ann was born and grew up in West River Station, N.S. and graduated from Aberdeen Hospital Nursing School in June 1950. She nursed at Amherst Hospital until moving to Winnipeg in 1956 to study operating room nursing technique. Ann and Vernon met at St. Boniface Hospital in 1956 and married in October 1958. Ann and Vernon settled in Medicine Hat, Alberta and raised two sons who both pursued careers in medicine. Ann was an active member of St. John’s Presbyterian Church in Medicine Hat and following Vernon’s retirement they moved to Crescent Beach and remained active members at St. John’s Presbyterian congregation in White Rock. The family would like to thank the Emergency Room and fourth floor staff of Peace Arch Hospital for the excellent care provided during Ann’s hospitalization. A memorial service with reception to follow will be held at St. John’s Presbyterian Church in White Rock on January 12th at 11 am. Services to be presided over by the Rev. Willem van der Westhuizen. Ann will be interred at Valleyview cemetery in a private family ceremony. In lieu of flowers, the family requests that donations be made to the Heart and Stroke foundation.