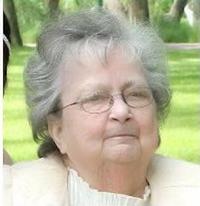 Margaret “Jean” Harvey of Medicine Hat, passed away on Monday, January 7, 2013, at the age of 81 years, beloved wife of the late Ralph Harvey. She leaves to cherish her memory five children, Danny (Liz), Karen (Garry) Mayer, Fred (Linda), Joanne (Ted) Simpson, Angie Harvey (Cy Williams); thirteen grandchildren, Dale (Jen), Lisa, Shane (Margaret), Greg (Trisha), Susan (Dana), Jennifer, Sarah (Matt), Ryan, Virginia, Teddy (Natasha), Christina (Robson), Amanda (Roger), Cody (Julie); 21 great grandchildren; two brothers, Ron (Alice) Gillies and Ray Gillies; two sisters, Eleen (Louis) Garcia and Mary (Mike) O’Brien as well as numerous brothers and sisters-in-law, nieces and nephews. She was predeceased by her parents, Pat and Laughlan Gillies; her husband Ralph on May 18, 2005; one daughter Mary in infancy; one granddaughter, Lindsay and one great grandson, Calvin. Mom was born in Anyox, BC., which is where she developed her love of the mountains and ocean. Mom’s love for God began with her being raised in a convent, and this relationship developed and grew throughout her life. She met Dad in August of 1948 and knew instantly that she was going to marry him. She celebrated their anniversary even after Dad was gone. Her love of travel showed at an early age, which she shared with Dad. They could often be seen taking off down the highway in Betsy, their motorhome. Together they raised their family of five children in a home where Mom loved to have her friends and family drop by at anytime. The coffee was always readily available, candy and chocolate bars were a short reach away. Friendly banter always ensued. Mom loved to read and had an uncanny ability to recall facts, which she used to her advantage to beat everyone at Jeopardy and Wheel of Fortune, which she loved to watch daily. In the spring they would anticipate the arrival of 2 special doves that would return to their garden every year which she continued until her passing. A Come and Go Tea will be held at 362 19th Street NE on Saturday, January 12, 2013 from 2:00 – 4:00 p.m. A memorial service will be held in Penticton at a later date. As an expression of sympathy donations may be made to the A.J.’s Loan Cupboard (Alan Joys Memorial Fund Society) Box 45006, McKenzie Postal Outlet, Medicine Hat, AB T1A 7H3. To e-mail an expression of sympathy, please direct it to: pattfh@telusplanet.net subject heading: Jean Harvey, or you may visit www.gonebutnotforgotten.ca and leave a message of condolence. Funeral Arrangements are by the PATTISON FUNERAL HOME AND CREMATORIUM 540 South Railway St. SE, Medicine Hat T1A 4C2

No Condolences for “HARVEY”