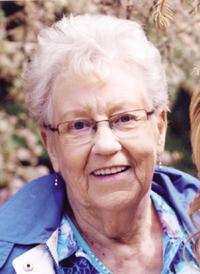 Feb. 9, 1939 – Dec. 30, 2012
Sharon Rose Geiger, beloved wife of Joseph, passed away peacefully after a brave battle with cancer in Medicine Hat, Alta. on Sun., Dec. 30, 2012 at the age of 73 years.
Sharon leaves to cherish her memory her hsuband of 57 years, Joseph; two sons Terry (Cindy), Rick; three grandchildren Brandi (Steven) Kent, Cole (Kristy) and Wyatt (Jodi) Geiger and great grandchildren: Taliah, Seth, Grace Kent and Blaire Geiger; two brothers Jack (Jean) Wagner, Keith (Mary) Wagner; sisters-in-law Eleanor Wagner, Iva Jean Wagner, Philomine (John) Duncanson, Martha (Morris) Carron, Avril Geiger; brothers-in-law Leo (Mabel) and Philip Geiger, as well as numerous nieces and nephews.
Sharon was predeceased by her parents Frank and Mary Wagner; two brothers Ken and Harry; sister Maloa (Bob) Stewart, as well as numerous brothers and sisters-in-law on the Geiger side.
Sharon was born in Eastend, Sask. on Feb. 9, 1939 and raised on the family farm south of Consul, Sask.  On Nov. 29. 1955, Sharon married Joseph Peter Geiger in Cranbrook, B.C. They farmed and ranched on the Geiger family farm (a few miles west of where Sharon was raised) until December 1986 when they retired to Crescent Heights in Medicine Hat, Alta. In 1991 they moved to their dream home on Souch Bay S.E. where they resided until moving to Meadowlands on New Years Eve 2011.
Sharon loved nothing more than a good visit with family and friends, faithfully keeping in touch by phone and by car and eventually by embracing email and Facebook. Sharon loved the many friends she made over the years while taking airplane landing lessons, serving on the Consul School Board, selling World Book and Mary Kay, playing bingo and bowling.
She was our own walking family history book as she used her photographic memory to keep track of major family events like births, deaths, weddings, etc., and she rarely had to look up a phone number.
She will be greatly missed by all and may be remembered with a gift to the Margaret E. Yuill Cancer Centre or to a charity of your choice.
The funeral service was held in  the Consul Community Hall in Consul, Sask. on Wed., Jan. 9, 2013 at 2 p.m. with Pator Dave Manley officiating. Interment will take place at Consul Cemetery at a later date in the spring of 2013.
Active pallbearers were Cole Geiger, Tad Halladay, Bill Broderick, Wyatt Geiger, Jess Halladay, Cecil Weisgerber. Honorary pallbearers were all those who shared in Sharon’s life.
To email an expression of sympathy you may visit www.gonebutnotforgotten.ca.
Binkley’s Funeral Service, Maple Creek and Leader, in charge of arrangements. 306-662-2292

No Condolences for “SHARON ROSE GEIGER”