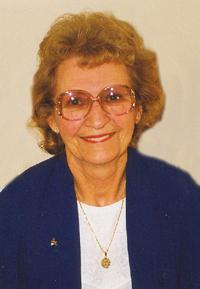 The family of Ella Everett (nee: Beierbach), sadly announce her passing on Monday, January 14, 2013 at Riverview Care Centre at the age 85 years. Ella was born on October 3, 1927 on the family farm, south of Burstall, Saskatchewan. At the age of 16 years, she moved to Medicine Hat and worked in various coffee shops and ladies clothing stores, later moving to Kelowna, BC and then to Calgary. In 1957, she married Major Everett and lived in Calgary, Lethbridge and Edmonton where Major worked for Safeway as a butcher. They adopted Rainella and moved to Richmound, California in 1959 and also lived in Mill Valley and Novato, California (suburb of San Francisco). When Rainee’s school friend Sandy’s mother passed away, Ella and Major cared for her as Foster Parents. Visits with daughter Rainee, husband Stan and Ella’s granddaughter Annie were special to her as were the visits from Sandy, husband Stan and their daughters, Yvonne and Amber, whom Ella and Major considered their granddaughters. Over the years Ella cared for many babies that were waiting for permanent homes, as well as many babies of working parents. Ella enjoyed hobbies of sewing, knitting and crochet work, having been taught by Major’s mother who was a dressmaker. Her other hobbies included tending budgies and other beautiful birds in their backyard as well as gardening. Upon Major’s retirement, they moved to Sandy, Oregon and continued to enjoy years of fishing and travelling. In 1993, Major passed away and in 1994 Ella moved back to Medicine Hat to be near family. When she broke her arm she moved to the cottages at the Good Samaritan Society. After breaking her hip she moved to Riverview Care Centre where she has received very good care since June of 2005. Ella was predeceased by her husband Major Everett on September 28, 1993; her father, John Beierbach, April 29, 1991; her mother, Leontina “Lena” Beierbach, July 29, 1972; two brothers, John Beierbach Jr., October 31, 2005 and Edwin Beierbach, December 19, 2005. She is survived by one daughter, Rainella (Stan) Stahr of Medford, Oregon and one granddaughter, Andrea Maria Stahr of Santa Rosa, California. She is also survived by her foster daughter, Sandy Peterson of Tacoma, Washington; foster granddaughters, Yvonne North (Geoff) and Amber Peterson both of Washington; a stepson Cliff (Lynda) Everett of Abbottsford, B.C.; her sisters, Frieda Mitchell and Dorothy (Gilbert) Lonson of Medicine Hat; sisters-in-law, Dorothy (John) Beierbach of Medicine Hat and Adeline (Edwin) Beierbach of Calgary as well as numerous nieces and nephews. She will be sadly missed but never forgotten. Our family is looking forward to one day being with Ella again, in heaven with Jesus. God be with us all, “until we meet again.” No funeral service will be held at this time, a memorial service will take place at a later date. As an expression of sympathy donations may be made to the Alzheimer Society 401D 3rd Street SE, Medicine Hat, Alberta, T1A 0G8. To e-mail an expression of sympathy, please direct it to: pattfh@telusplanet.net subject heading: Ella Everett, or you may visit www.gonebutnotforgotten.ca and leave a message of condolence. Funeral Arrangements are by the PATTISON FUNERAL HOME AND CREMATORIUM 540 South Railway St. SE, Medicine Hat T1A 4C2