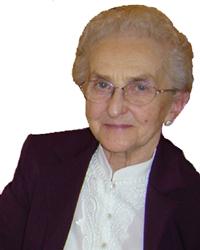 Amanda Christena Bayer of Medicine Hat, passed away on Sunday, December 30, 2013, at the age of 91 years, beloved wife of the late Reinhold Bayer. Amanda is remembered for her love of and specialities in cooking and baking. Outfitting her many clients while employed at Joys Styles was another passion. She also worked side-by-side with Reinhold on their farm and ranch. Amanda leaves to cherish her memory two daughters, Sharon Bayer of Bragg Creek and Betty Bayer (Susan Henking) of Geneva, New York; two grandchildren, Christian (Jamie Warren) Rutledge of New York City and Justin Wallace of Redcliff; two great grandchildren, Jakub Wallace and Austin Wallace; two brothers, Leonard (Frieda) Gehring and Emil (Mary) Gehring both of Medicine Hat; two sisters-in-law, Bertha Gehring and Donna Gehring both of Medicine Hat.  She was predeceased by her parents, Fredrika and Theodore Gehring; her husband Reinhold on July 22, 2006; four brothers, Andrew, Art, Johnny (Helen) and Alvin Gehring. Amanda also leaves many Bayer & Gehring nieces and nephews to cherish her memory. Amanda was laid to rest beside Reinhold at Hillside Cemetery and a memorial celebration of Amanda’s life will be held in late Spring.  Those who wish to remember Amanda may direct a donation to The Good Samaritan Society to support elder care c/o 550 Spruce Way SE, Medicine Hat, AB T1B 4P1.   To e-mail an expression of sympathy, please direct it to: pattfh@telusplanet.net subject heading: Amanda Bayer, or you may visit www.gonebutnotforgotten.ca and leave a message of condolence.  Funeral Arrangements are by the PATTISON FUNERAL HOME AND CREMATORIUM 540 South Railway St. SE, Medicine Hat T1A 4C2