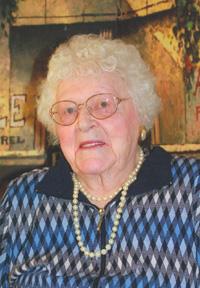 Martha Holstein of Medicine Hat, passed away on Tuesday, February 5, 2013, at the age of 91 years, beloved wife of the late Gotfred Holstein. She leaves to cherish her memory two sons, Melvin (Diane) Holstein and Dwight (Helen) Holstein; five grandchildren, Quentin (Tara) son, Ethan; Sandi; Kris; Dexter (Malissa) and their children, Carson and Kailey; Ryan (Alison); two sisters, Mathilda Meier and Bertha (Bill) Schmidt; sister-in-law, Irene Hartman as well as numerous nieces and nephews. She was predeceased by her parents, Magdalena and Frederich Hartman; her husband Gotfred in 1988; one son, Harvey; one daughter, Shirley (Dave) Leslie; Martha’s brothers, Rudy, Albert (Elsie), Fred (Ann), Rudolph and Art; two sisters, Lizzie (Herbert) Herman and Anne (Phillip) Stabler, brother-law Norman Meier. Martha was born April 25, 1921 at Kuest, Saskatchewan (near Richmound) to Fred and Magdelina Hartman. She was raised, educated and worked for neighbours in the area until she was 20 years of age. Martha married Gotfred Holstein on December 17, 1941. They resided on the Holstein Homestead near Leader, Saskatchewan and farmed until 1979 at which time they retired to Medicine Hat, Alberta. Her husband passed away in February of 1988 and shortly after that she moved into the Chinook Village. In 2004, due to failing health, she moved into the Good Samaritan Society, where she was well looked after. Martha enjoyed being a homemaker and all that went with these duties. She enjoyed gardening both vegetables and geraniums, cooking, baking, as well as many hours were spent at her sewing machine making quilts, crocheting, knitting and many other crafts. Her farming days were busy helping her husband with the farming, milking cows and raising chickens and turkeys. Once she had retired she had more time to enjoy bowling, bingo, Women of the Moose, the Veiner Centre, activities and games at the Chinook Village. Her fondest times were spent with her family, getting together with her brothers and sisters for all the special occasions. Family and friends who wish to pay their respects may do so at the PATTISON FUNERAL HOME on Thursday evening from 7:00 -9:00 p.m. and on Friday from 9:00 – 9:55 a.m. The funeral service will be held in the PATTISON CHAPEL on Friday, February 8, 2013 at 10:00 a.m. with Rev. Dr. Shane P. Andrus officiating. Interment will follow in the Hillside Cemetery. As an expression of sympathy donations may be made to the Good Samaritan Society c/o 550 Spruce Way SE, Medicine Hat, AB T1B 4P1. To e-mail an expression of sympathy, please direct it to: pattfh@telusplanet.net subject heading: Martha Holstein or you may visit www.gonebutnotforgotten.ca and leave a message of condolence. Funeral Arrangements are by the PATTISON FUNERAL HOME AND CREMATORIUM 540 South Railway St. SE, Medicine Hat T1A 4C2

No Condolences for “HOLSTEIN”