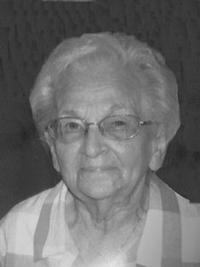 Martha Sulz of Medicine Hat, passed away on Wednesday, February 6, 2013, at the age of 93 years, beloved wife of the late Emil Sulz. She leaves to cherish her memory two sons, Ron (Clara) Sulz, and Barry (Diane) Sulz and daughter-in-law Bette Sulz. Martha’s grandchildren, Dawson (Nancy), Dana (Jason), Trent (Sherry), Sandy (Doug), Terry, Sharon, Darcy (Shelley), Stacey (Ryan), Angela (Tyler). Great grandchildren, Jessica, Justin, Jordanne, Brian, Matthew, Julien, April, Sheldon, Matt, Chance, Karlyle and Dailey. Great great grandchildren Rylee, Madyson, and Brooklyn. She is also survived by her sisters and brother-in-law, Dave, Viola, Anne & Lynda and also many nieces and nephews and special friends.
Martha was born on July 17, 1919 in Irvine to August and Regina Jans who emigrated from Bessarabia in the late 1800’s. On October 31, 1936 she married Emil Sulz. Martha was predeceased by her parents; her husband Emil (November 1980); son, Donald Eugene (May 1949); daughter, Joyce (February 1999); son, Harold (September 2012) as well as her brothers, Fred, John, Henry, Sam and Jacob; and one sister Lydia.
Martha was educated in the Irvine district and was a great student. She was very upset when she had to quit school after grade 8 to help with the family farm. Martha lived in her beloved home for 58 years until her first stroke in September 2012. She had a 2nd stroke on January 24, 2013. Martha was very involved with the Veiner Centre in carpet bowling, bocce, having lunch with friends and enjoyed bingo and gardening. She competed in the ‘90 Sunny South Senior Games, the ‘94 Alberta Senior Games and the ‘98 Canada Senior Games and officiated in the ‘92 Alberta Golden Days. Martha also enjoyed visiting with her family, her trips to BC, outings to Havre and special times with her many grand children.
Funeral and memorial services will be announced at a later date. As an expression of sympathy donations may be made to the Palliative Care Unit c/o Medicine Hat Regional Hospital, 666 5th Street SW, Medicine Hat, AB T1A 4H6. To e-mail an expression of sympathy, please direct it to: pattfh@telusplanet.net subject heading: Martha Sulz, or you may visit www.gonebutnotforgotten.ca and leave a message of condolence. Funeral Arrangements are by the PATTISON FUNERAL HOME AND CREMATORIUM 540 South Railway St. SE, Medicine Hat T1A 4C2

No Condolences for “SULZ”