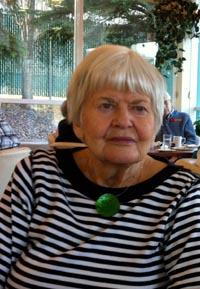 June 22,1927-February 9,2013
Margaret was born in Medicine Hat, Alberta by the South Saskatchewan River whose cliffs and coulees she explored as a child. She attended the University of Alberta completing a Medical degree. She initially taught Anatomy and was involved in research at the UofA and University of Ottawa but following her passion for patient contact she attained her specialty in Psychiatry at age 50. For 25 years she practiced out of her home in Ottawa.
Margaret enjoyed all that the Capital offered: great walking ,arts gardening and the Rideau River. In 2002 she moved to Winnipeg to be closer to family. Being close to another river, under the big prairie sky was a homecoming of sorts.
Margaret leaves behind her children: Kathleen (Warren) Waxer, Sheila delaVarende, Ian Fish (Jerri-Lee Mackay), Grandchildren: Hannah (Michael Ramsay), Clara and Ben Waxer, Emmanuel delaVarende, Jackson and Erika Gustafson-Fish, Step-Grandchildren: Emily and Zachary Ducharme. Close companion: Jim Baker, friend Francois delaVarende
Predeceased by: her parents Arthur Ross and Elizabeth Sloan Trotter, former husband David Fish, brother Graham Trotter and sister Florence Stewart.
Funeral service will be held at St Margaret’s Anglican Church, Winnipeg  Thursday February 14th at 1:30pm.  In lieu of flowers Margaret requested donations be made to Doctors Without Borders.
www.thomsoninthepark.com