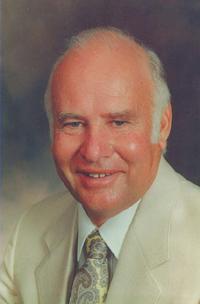 October 11,1929 – February 22, 2013
Roy James Neubauer passed away on Friday, February 22, 2013, at the age of 83 years, beloved husband of Leona Neubauer of Irvine. He also leaves to cherish his memory two sons, Brad (Patricia Paton) and Mark (Nichole) and their children, Logan and Evie; his sister, Alice Baker as well as numerous brothers and sisters-in-law. He was predeceased by his parents, Fred and Eva Neubauer. Roy received his elementary schooling in the Clover Hill district. He was the only one in his grade and soon became the school caretaker (he later became the eternal school caretaker by purchasing land that included the school house in 1974). He finished his high school in Irvine, took up boxing and became an officer in the Army Cadets. He was a specialist with a rifle and taught marksmanship to Cadets. After graduating, he became a surveyor for the PFRA and quickly assumed his own crew. His work with the PFRA was associated with bringing irrigation to southeastern Alberta. However, he soon returned to the family farm upon his father’s illness. In addition, Roy became a school bus driver. This was a post he held for 22 years and enjoyed his school kids coming up to talk to him even in his later years. He then married Leona in 1960, and became a father to two boys by 1965. Roy was a strong believer in community service. As such, he received a Volunteer Recognition award in 1994 from the Irvine Ag Society & Recreation Board. He was mayor of Irvine for four years, a charter member of the Irvine Lions Club for almost 30 years, and a member of the Medicine Hat Regional Hospital Board for over 23 years. He was also a passionate curler and fisherman. Roy loved his farm and operated it through its centennial anniversary, a few years ago. He was very proud that the original Neubauer homestead is still a part of the farm and has always been Neubauer land. Although he hadn’t lived on the farm for many years, he often mentioned how good he felt by just being out there. Roy was also very proud of his family and all their accomplishments, and in particular he was continually delighted with his two grandchildren, Logan and Evie. Most importantly however, was Roy’s keen interest in everything that was going on. He had a huge laugh that would allow you to easily locate him (which has been inherited by Logan!) and a need to visit with anyone, anytime, and anywhere. A traveller and strong family man, Roy loved life, lived it well and to its fullest. Family and friends who wish to pay their respects may do so at the PATTISON FUNERAL HOME on Thursday evening from 7:00 – 9:00 p.m. and on Friday at the church from 12 noon to 12:55 p.m. The funeral service will be held in the St. John’s Presbyterian Church (504 2nd Street SE) on Friday, March 1, 2013 at 1:00 p.m. with Rev. Dr. Nancy Cocks officiating. As an expression of sympathy donations may be made to the Medicine Hat and District Health Foundation, 666 5th Street SW, Medicine Hat, T1A 4H6. To e-mail an expression of sympathy, please direct it to: pattfh@telusplanet.net subject heading: Roy Neubauer, or you may visit www.gonebutnotforgotten.ca and leave a message of condolence. Funeral Arrangements are by the PATTISON FUNERAL HOME AND CREMATORIUM 540 South Railway St. SE, Medicine Hat T1A 4C2

No Condolences for “ROY JAMES NEUBAUER”