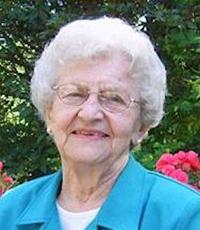 Hilda Emelia Adolf went to be with the Lord on March 03, 2013 at the age of 88 years at Heritage Village in Chilliwack, BC. She leaves to cherish her memory her son Don (Darlene) Adolf of Calgary Alberta, and grandchildren Donalyn (Brian) Hotrum, Shelley (Cory) Strobel and Mark (Dana) Adolf; and her daughter Elaine (Gary) Hilz of Chilliwack BC, and grandchildren Amber (Shane) Hipwell, Aaron (Michelle) Hilz and Amanda (Jason) Pringle. She is also survived by nine great grandchildren, Kayla, Maria, Chloe, Melissa, Owen, Evan, Corbin, Benjamin and Eli. Also surviving her is four brothers Emil (Irene) Nelson, Albert (Betty) Nelson, Gordon (Darlene) Nelson, Stan (Rita) Nelson; one sister, Ellen Saar; as well as sister-in-law Betty Heck, and brother-in-law Gus Adolf and numerous nieces, nephews and cousins. She was predeceased by her parents Edwin and Mathilda Nelson, her husband Ben, three brothers Melvin, Arnold and Johnny and one sister Agnes Looy, sisters-in-law Maxine Nelson and Ann Nelson, brother-in-law Lloyd Saar, nephew Brett Nelson and grandson-in- law Dallas Daniels. Hilda was born to Edwin and Mathilda Nelson on June 30, 1924 in Coronation, Alberta, married Ben Adolf on July 8, 1945 in Coronation and together they farmed for 35 years in the Spondin area. In 1980 on retirement they moved to Chilliwack, BC where they lived for 16 years. In 1996 they moved to Chinook Village in Medicine Hat where they resided until Ben’s passing. In 2000 Hilda moved back to Chilliwack where she resided until her passing. A celebration of Hilda’s life will be held at the Chilliwack EM Church on Friday, March 8, 2013 at 11:00 a.m. with Rev. Wallace Faas officiating and a graveside service on Monday, March 11 at 1:00p.m. at the Hillside Cemetery, with Rev. Steve Pahl officiating. Those who wish to attend the graveside service are asked to meet at the main gate to the cemetery by 12:45 p.m. Following the graveside service, an informal time of remembrance with Hilda’s family will be held at Hillcrest Evangelical Missionary Church (3785 13th Ave SE) at 1:30 p.m. In lieu of flowers donations can be made to The Gideon Bible International. To e-mail an expression of sympathy, please direct it to: pattfh@telusplanet.net subject heading: Hilda Adolf, or you may visit www.gonebutnotforgotten.ca and leave a message of condolence. Funeral Arrangements are by the PATTISON FUNERAL HOME AND CREMATORIUM 540 South Railway St. SE, Medicine Hat T1A 4C2

No Condolences for “ADOLF”