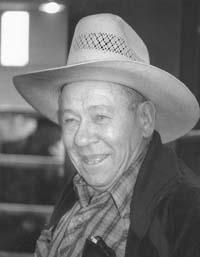 Philip Weiszbeck of Medicine Hat passed away on Saturday, March 30, 2013, at the age of 92 years. He leaves to cherish his memory, his two sisters, Mary Townsend and Jenny (Gerry) Neil; two sisters-in-law, Maureen Weiszbeck and Ardath Weiszbeck as well as numerous nieces, nephews and great nieces and nephews. He was predeceased by his parents, Bridget and Adam Weiszbeck; his four brothers, Jerome, Willie (Pat), Johnny and Joe and one brother- in- law, Stan Townsend. Philip was born on February 14, 1921 in Fox Valley, Saskatchewan and raised in Medicine Hat. He enlisted in the Canadian Army in 1942 and served in the North Pacific with the 25th Artillery Regiment. After the war, he returned to Medicine Hat and worked as a ranch hand on several local ranches, and later at Ogilvie Mills then Western Co-op Fertilizers. Philip was a professional rodeo cowboy and competed in rodeos throughout Western Canada and the U.S. He leaves behind many life long rodeo friends. The family would like to acknowledge the excellent care Philip received at Riverview Care Center and from Dr. Booyens. A memorial service will be held at the Medicine Hat Royal Canadian Legion, Lancaster Room on Friday, April 5, 2013 at 3:00 p.m. with Life Celebrant, David Townsend. Officers and members of the Royal Canadian Legion, Robertson Memorial Branch #17 will conduct a poppy service for their departed comrade. A private family interment will be held in the Hillside Cemetery. As an expression of sympathy donations may be made to the Medicine Hat Royal Canadian Legion, 702 – 2 St. SE, Medicine Hat, Alberta, T1A 0E1, or the Riverview Care Center, 603 Prospect Drive SW, Medicine Hat, AB T1A 4C2 . To e-mail an expression of sympathy, please direct it to: pattfh@telusplanet.net subject heading: Philip Weiszbeck, or you may visit www.gonebutnotforgotten.ca and leave a message of condolence. Funeral Arrangements are by the PATTISON FUNERAL HOME AND CREMATORIUM 540 South Railway St. SE, Medicine Hat T1A 4C2