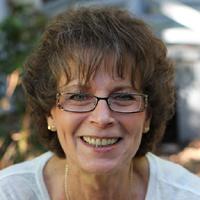 1950 – 2013
Mrs. Bonny Fandrich (nee Bouchard), beloved wife of Bryan Fandrich, passed away peacefully at the Carmel Hospice in Medicine Hat on Thursday, April 11, 2013, at the age of 62 years from a pancreatic neuroendocrine tumor. Bonny leaves to cherish her memory; two daughters, Leslie Fandrich (Chris Janata) of Warwick, New York and Jill (Mark) Braithwaite of Calgary, Alberta; one step daughter, Tracy (Allen) Woloshyniuk of Coalhurst, Alberta; and four grandchildren, Milo and Quinn Janata and William and Nicole Woloshyniuk. Bonny is also survived by three dear sisters, Shirley, Alita and Vicki, three sisters-in-law, six brothers-in-law and 31 nieces and nephews. She was predeceased by her parents Roland and Mary Bouchard of Red Deer, and her parents-in-law Edward and Iris Fandrich of Medicine Hat. Bonny was born June 10, 1950 in Red Deer, Alberta. She moved to Medicine Hat with her family when she was 16, excelled at Track and Field in school and loved playing the accordion. Her love affair with Bryan began in 1968. After she built a house with him, they got married in 1972 and their two daughters were born soon after. In 1981, when “the girls” were six and four they moved up to a grand old house on “the Hill” with a view of the cliffs, where they raised their family and lived until just last year. Bonny worked hard in every aspect of her life. Her home and garden were her pride and joy, there was a home cooked meal on the table almost every night and she assisted Bryan in the refrigeration business as well as helping maintain and manage several rental properties. She was devoted to her family and her relationship with her two daughters was always very close. She loved riding horses as a young girl, aerobics and bike riding were her passions in the 80’s and 90’s and she always took pride in looking her best. She was still wearing sexy heels at age 60. The family grew up camping in “the van” and travelling all over Southern Alberta and into the United States. Memorable trips included Yellowstone, the Lewis & Clark Caverns and into British Columbia. Bonny laughed easily, loved deeply and enjoyed her life immensely. In her later life she loved travelling to New York to visit her daughter’s family and with Bryan she completed a life long dream when they travelled to Hawaii in 2010 to attend a dear friend’s wedding. That trip happened right before she was diagnosed with cancer and it would sadly be her last. She bravely faced her cancer diagnosis and fought as hard as she could, living with the challenges it brought her with strength and determination. Bonny’s family would like to thank all the doctors, nurses and staff at Tom Baker Cancer Center in Calgary and the Medicine Hat Regional Hospital and give a special heartfelt thanks to everyone at the Carmel Hospice in Medicine Hat for the tireless and devoted care they provided to all of us during this most vulnerable time. Cremation has taken place and a Memorial Celebration of Bonny’s life will be held in Calgary at McInnis & Holloway Funeral Homes, Fish Creek Chapel 14441 Bannister Road Southeast, Calgary, Alberta on Saturday, April 20, 2013 at 2:00pm with a reception to follow. In lieu of flowers, memorial donations in Bonny’s name can be made directly to the Carmel Hospice, St. Joseph’s Home, 156 – 3rd Street NE, Medicine Hat, Alberta, T1A 5M1.
To e-mail an expression of sympathy, please direct it to: pattfh@ telusplanet.net subject heading: Bonny Fandrich, or you may visit www.gonebutnotforgotten.ca and leave a message of condolence. Funeral Arrangements are by the PATTISON FUNERAL HOME AND CREMATORIUM 540 South Railway St. SE, Medicine Hat T1A 4C2

No Condolences for “BONNY FANDRICH”