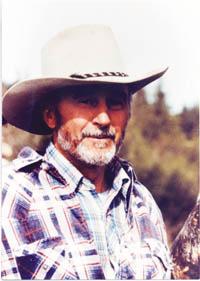 Peter Scherger was born at home on January 25, 1927, in the Lancelot District of southwestern Saskatchewan. He attended Lancelot School for his elementary grades and then St. Charles College in Battleford, Saskatchewan for higher education.
As a young man, he worked for Uncle Nick Volk on a dray, delivering coal in the Taber area and on a threshing crew at Tilley and the nearby farms, before returning to farming near Lancer. He used to tell the story of how he broke a horse by riding it to the bar in town. All the roads were blocked from a blizzard, and it appears there was important business awaiting him there.
On June 30, 1952 he married Elizabeth Wagner from Lemsford. They had five children: Angela, Timothy, Patrick, Raymond and Robert. They raised their family on the farm at Lancer, where they lived for 26 years.
In 1978, Peter and Betty semi-retired to Maple Creek, but he still kept his hand on his farming for a few years after that. Dad also worked for Binkley’s in Maple Creek for 10 years and for a while at Sinkler’s Antique Shop. Most of his time, however, was spent restoring antique motors and building wood projects. We each have at least one table that Dad crafted for us.
Dad was wagon boss on two wagon trips through the Sandhills and indeed had raised and trained a set of oxen to pull a Red River cart while he was still on the farm.
Dad had a very high tolerance for pain; it never bothered him to grab a full set of spark plugs and their wires to check for a complete circuit. He is one of the last men of his generation to have worked with horses on his land. Dad always kept tools of all sorts within reach; there was always a nail to be pounded or something to be fixed or remodeled. Recently he was very disgusted saying, “Isn’t that something; here I got no teeth, no ears and no pocket knife!”
Peter Scherger was predeceased by his parents: Louis and Marian Scherger, his siblings: Frank, Barbara, Andrew, Odelia, John, Phillip, Joseph and Eleanor, and his son Patrick.
He is survived by Betty, his wife of over 60 years, his children: Angela and Brian Elle; sons Tim and Kathy; Ray and Shelley and Robert and Sandra and his daughter-in-law Brenda. He also leaves grandchildren: Peter, Elizabeth, Justin, Victoria, Jordan, Lane, Jace, Kale, Ross and Abigal; great grandchildren Hanna, Hailee, Emilie and Brandon; one brother George and a sister-in-law Maureen Schmidt.
The funeral service was held at St. Lawrence Catholic Church in Maple Creek, Sask. on Tues., Apr. 9 at 11 a.m. with Fr. F. Kurisinkal officiating. A private family interment was held at the Maple Creek Cemetery. Prayers were held at Binkley’s Funeral Chapel on Monday at 7 p.m. Active pallbearers were Lane Scherger, Jordon Scherger, Peter Grossett, Ross Scherger, Kane Scherger, Jace Scherger, Justin Hauck, Brandon Lees. Honorary pallbearers were Elizabeth Grossett, Emily Scriven, Abbie Scherger, Victoria Lees, Hailey Scriven, Hanna Grossett.
Friends who wish to, may remember Peter with a gift to the St. Lawrence CWL or the St. Joseph’s Senior’s Home, Medicine Hat.
To email an expression of sympathy you can visit www.gonebutnotforgotten.ca.
Binkley’s Funeral Service, Maple Creek and Leader in charge of arrangements. 306-662-2292

No Condolences for “SCHERGER”