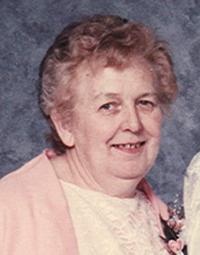 Mrs. Lois Norma Kvale, beloved wife of the late Mr. Edwin Kvale, of Carseland, Alberta, formerly of Manyberries where she resided for 58 years, passed away on Sunday, April 14th, 2013 at the age of 84 years. Lois leaves to cherish her memory her four children, Bonnie Kvale, Arlene (Daryl) Imler, Duane Kvale (Belinda Clack), and Tracy (Lee) Snortland; six grandchildren, Colleen (Josh) Garrett, Crystal and Dawn Imler, and Darci, Jace, and Jaxson Snortland; one sister, Doreen Klein; as well as numerous nieces and nephews. Lois was predeceased by her parents, Orie and Marjorie Mallory, her father and mother-in-law, Thorne and Jean Kvale; brother, Don Mallory, sister, Melva Morrow; brother-in-law, Herb Klein; brother and sister-in-law, Tom and Grace Kvale; sister and brother-in-law, Laura and Marvin Scheelar; nephews, Don Lebold, Murray Lebold, and Lorne Kvale; grandson, Dean Knudslien; and special friend, Diane Wiles. Lois was born on March 19th, 1929 in Regina, Saskatchewan. Lois attended various schools in southern Saskatchewan until she completed her schooling. She later travelled to Alberta where she attended CUC. Lois then worked as a teacher at New Home where she met her future husband, Edwin. On October 21st, 1954 Lois married Edwin in Medicine Hat, Alberta. They lived on his family farm where they farmed together and raised their four children. Lois enjoyed sewing, gardening, drawing, music, and going to church whenever she was able to. She also loved to spend any time she could with her children, grandchildren and any close friends. Lois’ strong faith in The Lord was what helped her stay strong through all of her health struggles. Those wishing to pay their respects may do so at SEVENTH DAY ADVENTIST CHURCH, 1933 Dunmore Road SE, on Friday from 12:00 to 12:55 p.m. The Funeral Service will be held in SEVENTH DAY ADVENTIST CHURCH on Friday, April 19th, 2013 at 1:00 p.m. with Pastor Ghena Girleanu officiating. A Private Interment will follow in the Family Plot at Saamis Prairie View Cemetery. Memorial gifts in Lois’s memory may be made to Seventh Day Adventist Church, 1933 Dunmore Road SE, Medicine Hat, Alberta, T1A 1Z9. Condolences may be sent through www.saamis.com or www.gonebutnotforgotten.ca or to condolences@saamis.com subject heading Lois Kvale. Radio funeral announcement can be heard on Thursday around 12:35 p.m. on 93.7 Praise FM. Funeral arrangements are entrusted to SAAMIS MEMORIAL FUNERAL CHAPEL AND CREMATORIUM, “The Chapel in the Park”, locally owned and directed. Should you wish any additional information, please telephone (403)528-2599