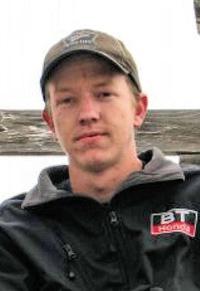 Kristoff Mathew Eichelbaum
August 2, 1985 – April 21, 2013
It is with profound sadness we announce the passing of Kristoff Eichelbaum. Kris was born on August 2, 1985, the youngest son of Ernst and Peggy Eichelbaum. Growing up as the youngest of the 4 boys, he was always the one willing to take risks, and most of the time they paid off. During his childhood he spent countless hours learning about cars, farming, and the value of a hard days work.
In his adult years he attended the Medicine Hat College and became a Journeyman Welder. Never being satisfied with just one trade, he went on to work in autobody repair, construction, welding, and as a farm/ranch hand. Whenever Kris put his heart and mind into something, anything was possible. He was also a stickler for perfection. If something didn’t turn out quite the way he wanted, he would do it again until it was right.
Kris was an exceptional Uncle. He was always the most playful Uncle who loved his nieces and nephews whole heartedly and celebrated their accomplishments with them as much as possible.
Kris was predeceased by his mother Peggy Eichelbaum and his grand parents R. Ernst Eichelbaum, Erika Eichelbaum, Victor Ley and Marjorie Ley. He leaves to cherish his memory his father Ernst, his brothers, Mani, Trevor (Crystal Beck) and Nik (Jamie), his beloved nieces and nephews, Kalia, Gaetana, Anton, Axel, Nikola, Catherine and Alexandra, as well as numerous other relatives and friends. Kris will forever be in our hearts and minds. Family and friends who wish to pay their respects may do so at the PATTISON FUNERAL HOME on Monday evening from 6:00 – 8:00 p.m. and on Tuesday at the church from 12:00 noon – 12:55 p.m. The funeral service will be held in the Zion Lutheran Church (104 2nd Ave, Bow Island) on Tuesday, April 30, 2013 at 1:00 p.m. with Rev. Mac deWaal officiating. Interment will follow in the Bow Island Cemetery. As an expression of sympathy donations may be made to AADAC in care of the Medicine Hat Regional Hospital Mental Health Program 666 5th Street SW, Medicine Hat, Alberta T1A 4H6. To e-mail an expression of sympathy, please direct it to: pattfh@telusplanet.net subject heading: Kristoff Eichelbaum. Funeral Arrangements are by the PATTISON FUNERAL HOME AND CREMATORIUM 540 South Railway St. SE, Medicine Hat T1A 4C2