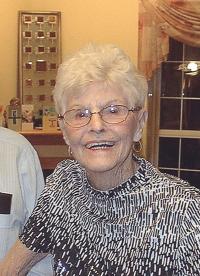 Frances Anderson, beloved wife of William “Bill” Anderson of Medicine Hat, passed away on Wednesday, May 1st, 2013 at the age of 90 years. Frances also leaves to cherish her memory one son, David (Darlene) Anderson of Hanna; two grandchildren, Michelle Anderson (Will Mihin) of Sand Point, Idaho and their children Quin and Kole, and Lisa Anderson of Red Deer; two brothers, Anthony and Joseph Hittel; one sister, Sister Emily Hittel; one brother-in-law, Marty Ackerman; as well as numerous nieces and nephews and Bill’s family. Frances was predeceased by her son, William Anderson; her parents, John and Gertrude Hittel; three brothers, Mike (Mary), Ben (Anne) and Pius Hittel; four sisters, “Lizzy” Elizabeth (Joe) Schwengler, Catherine (Maynard) Mastel, Rose (William) Larkin, and Mary Ackerman; and one sister-in-law, Rachel Hittel. Frances was born on January 29th, 1923 at Liebenthal, Saskatchewan where she was raised and educated. She moved to Calgary and, in 1962, married Bill Anderson. They continued to live in Calgary until relocating to Caroline, eventually making Hanna their home where they raised their boys. Upon retiring in 2003, Frances and Bill moved to Medicine Hat. Frances loved entertaining, especially if it involved family gatherings. She enjoyed cooking, baking, listening to music, reading, and spending time with her grandchildren. Frances will be lovingly remembered by her family and friends. The Funeral Mass will be celebrated in ST. PATRICK’S ROMAN CATHOLIC CHURCH, 238 – 2nd Avenue NE, on Monday, May 6th, 2013 at 11:00 a.m. with Father Long Vu, celebrant. Memorial gifts in Frances’s memory may be made to the SPCA, 55 Southwest Drive SW, Medicine Hat, Alberta, T1A 8E8. Condolences may be sent through www.saamis.com or www.gonebutnotforgotten.ca or to condolences@saamis.com subject heading Frances Anderson. Funeral arrangements are entrusted to SAAMIS MEMORIAL FUNERAL CHAPEL AND CREMATORIUM, “The Chapel in the Park”, locally owned and directed. Should you wish any additional information, please telephone (403)528-2599