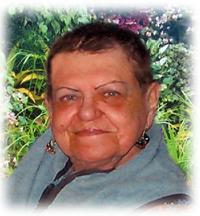 1932 ~ 2013
Mrs. Eva Gaylor of Medicine Hat passed away at Masterpiece River Ridge on Wednesday, July 3, 2013, at the age of 81 years.   Eva was born January 10, 1932, a daughter to George and Molly Eirich.  She grew up in Redcliff where she attended school and created many childhood memories.  As a young lady she started working at the Glass Factory and this is where she would also meet her future husband, David. They remained in Redcliff and raised their family of four children.  She stayed at home with her kids and was a proud mother.  Eva was also proud of her home and kept it well maintained by painting the house and tending to her garden and flowers.  As her children grew, Eva entered the work force again and was employed in various capacities including working at Sunnyside Nursing Home and the Base in Suffield.  She was a hard worker and earned enough money to buy herself a brand new car… this was something she was very proud of.  Eva enjoyed the little things in life and especially enjoyed playing Bingo.  She was a kind, caring person with a big heart and will be deeply missed by her four children, Anne Gaylor of Redcliff, Barbara Gaylor and her daughter, Priscilla of Medicine Hat, Lyle Gaylor of Redcliff and his children, Bobby-Jo and Dylan; and Clayton (Laurie) Gaylor of Medicine Hat and their children, Lisa and Amy; a sister, Loreen (Don) Gartly of Redcliff; brothers, Alfred (Joan) Eirich of Edmonton, Wilfred (Marlet) Eirich of Medicine Hat, Harry (Pat) Eirich of Medicine Hat and Barry Eirich of Redcliff as well as numerous nieces and nephews.  Eva was predeceased by her husband, David in 1991 and her parents.  Those wishing to pay their respects may do so one hour prior to the funeral service which will be held at Cook Southland Funeral Chapel, 901 – 13 Street S.W., on Tuesday, July 9, 2013, at 11:00 A.M. with Reverend Barrett Scheske officiating.  Interment will follow at the Redcliff Cemetery. (Condolences may be expressed by visiting www.cooksouthland.com)  If friends so desire, memorial donations in Eva’s name may be made directly to the Alzheimer Society of Alberta, 401D – 3 Street S.E., Medicine Hat, Alberta, T1A 0G8.  Honoured to serve the family is Cook Southland Funeral Chapel, 901 – 13th Street S.W. Medicine Hat, Alberta T1A 4V4 Phone 403-527-6455

No Condolences for “EVA GAYLOR”