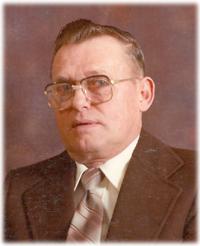 1936 ~ 2013
It is with heavy hearts that the family of Mathias (Matt) Hammel, beloved husband of Betty, announce his passing while at the Medicine Hat Regional Hospital on Tuesday, August 13, 2013, at the age of 76 years.  Matt was born in Prelate, Saskatchewan on December 13, 1936.  He was raised on the family farm where he learned the value of a hard days work.  Matt met the love of his life Betty, in Medicine Hat and were later married on April 27, 1957.  Their marriage was blessed with the births of eight children.  His work ethic from the farm followed him for the rest of his life.  He worked at various jobs before becoming the Town Foreman of Leader.  This was a position that Matt loved and his dedication and passion was evident in his work.  He was a long time resident of Leader and later moved to Medicine Hat in 2009.  Matt was a loyal and devoted family man and will be remembered by his loving wife, Betty and eight children, Catherine (Doug) Rupert, Ronald (Shannon) Hammel, Robert Hammel, Randolph Hammel, Rodney (Sheila) Hammel, Richard (Kim) Hammel, Douglas Hammel and Karri (Tim) Geiger;  a brother, Meinard (Bertha) Hammel and a sister, Florence (Adolph) Wirchowsky as well as numerous grandchildren, great-grandchildren and extended family.  He was predeceased by his parents, Adam and Catherine Hammel; three brothers, John, Martin and Leonard and two sisters, Francis and Rose.  The Graveside Service will be held at Hillside Cemetery on Wednesday, August 21, 2013, at 2:00 P.M.  Those wishing to attend the Graveside Service are invited to gather at Cook Southland Funeral Chapel between 1:30 P.M. and 1:45 P.M. to join the procession to Hillside Cemetery.  A luncheon will follow in the Cook Southland Reception Facility. (Condolences may be expressed by visiting www.cooksouthland.com)  Memorial donations in Matt’s name may be made directly to the Canadian Cancer Society, 102 Crestwood Square One, 1865 Dunmore Road S.E., Medicine Hat, Alberta, T1A 1Z8.  Honoured to serve the family is Cook Southland Funeral Chapel, 901 – 13th Street S.W. Medicine Hat, Alberta T1A 4V4 Phone 403-527-6455

No Condolences for “MATT HAMMEL”