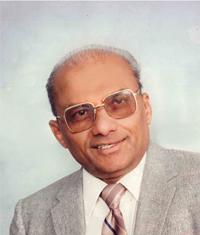 Mr. Sara (Saravanapavan) Pavan, beloved husband of Mrs. Param Pavan of Medicine Hat, passed away on Friday, November 22nd, 2013 at the Medicine Hat Regional Hospital at the age of 82 years.  Sara is also survived by his two brothers, Chanmukapavan of Sri Lanka and Thiripurapavan of Toronto; his sister-in-law, Jega (Sri) Ranjan of Edmonton; his close niece, Rajini (Hanif) Mohamed of Calgary; his close nephew, Raju (Jas) Ranjan of Edmonton; as well as numerous other nieces and nephews in Canada and Sri Lanka.  Sara was predeceased by his parents, Thambyiah and Ratnambal; and his sister.  Sara served in the Government of Sri Lanka and also served at the Sri Lankan Embassy in Rio de Janeiro and the Philippines.  He came to Medicine Hat in 1974 and married Param on December 14th, 1974.  In 1987, they moved to California where Sara worked in Hollywood acting in two movies and 28 TV commercials and was a member of the Screen Actor’s Guild.  In 2005, Sara returned to Medicine Hat where he was a writer for several newspapers and a frequent writer of letters to the Editor in the Medicine Hat News.  Sara was also a strong advocate for seniors’ health issues. A Celebration of Sara’s Life will be held in the SAAMIS CREEKSIDE CENTRE, 11 Dunmore Road SE, on Wednesday, November 27th, 2013 at 2:00 p.m.  Memorial gifts in Sara’s memory may be made to the Kidney Foundation of Canada, 6007 – 1A Street SW, Calgary, Alberta, T2H 0G5, or to the Alberta Heart & Stroke Foundation, #124, 430 – 6th Avenue SE, Medicine Hat, Alberta, T1A 2S8.  Condolences may be sent through www.saamis.com or to condolences@saamis.com subject heading Sara Pavan.  Radio funeral announcement can be heard on Tuesday around 12:35 p.m. on 93.7 Praise FM.  Funeral arrangements are entrusted to SAAMIS MEMORIAL FUNERAL CHAPEL AND CREMATORIUM, “The Chapel in the Park”, locally owned and directed. Should you wish any additional information, please telephone (403)528-2599